Becoming an Initiate; the great pyramid at Gisa, Part 2/7

– A ceremony inside the great pyramid.
Those who, urged on by a burning desire for truth, wanted to brave the ordeals of initiation would address their request to a priest of one of the great sanctuaries and, if judged worthy, would be led to the great pyramid at Giza. On the sixteenth tier of the pyramid was a three-foot opening in the wall, through which the neophyte and his guide entered.

Once inside, they found themselves in a long narrow passage lit only by a small lamp. Making their way along this dark, damp passage, they found that it ended in a deep well from which rose a thick cloud of smoke. By the light of their lamp, they could barely see the ladder leading down the side of the well. The pupil followed the priest down the ladder and into another corridor, which, after much twisting and turning, brought them to a closed door made of two great bronze panels. 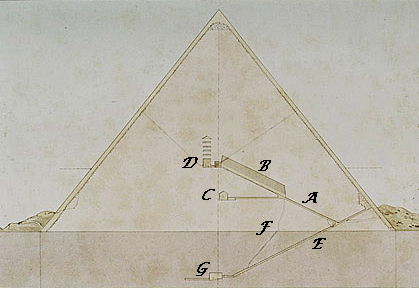 At this point the priest turned to the neophyte, saying: ‘I am not allowed to go any farther with you. From now on you will be alone. But before I leave you, you must make your will and tell me your last wishes, for the path that lies ahead is very difficult, and you run the risk of dying or of going out of your mind.’

Once the priest had gone, the two panels of the great door swung noiselessly open; the neophyte entered, and they closed behind him with a fearful clangour, which warned the priests in the sanctuary beyond of the arrival of a bold—or should I say a reckless—candidate in search of truth. For the moment, however, he was still alone. Continuing to advance along yet another corridor, he passed recesses hollowed out of the walls on both sides, from which peered faces twisted into horrible grimaces, which seemed all the more hideous and hostile because of the flickering light of his lamp. 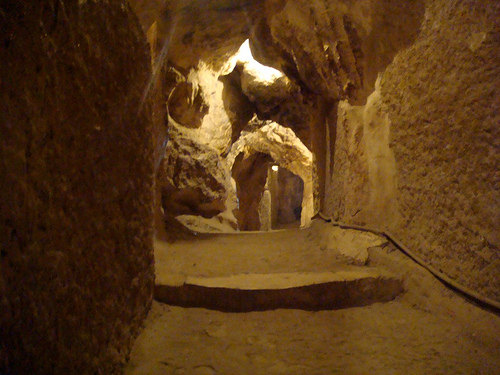 Although the faces belonged to lifeless statues, it seemed to the neophyte that they were the souls of the dead come to prevent him from passing, and he had to struggle to overcome his terror and continue on his way until he reached yet another door. Guarding this door were three men armed with swords and wearing helmets in the form of a jackal’s head.

One of the men advanced threateningly upon him, saying: ‘If you have the courage to go on, you may do so now. At this moment, you are still free to turn back, but once you have passed these doors you will be obliged to go forward. If you fail in this venture, you will never be allowed to leave the temple again. You will spend the rest of your days here as a slave. Day and night we are here to guard this door.’ 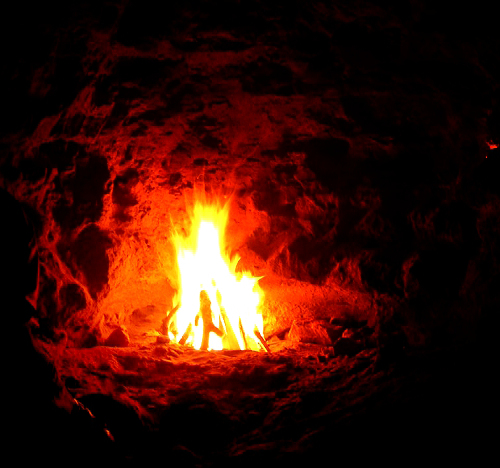 If the candidate decided to continue, the guards stood back and let him pass, and he entered a great chamber, lit only by the flames of an immense fire through which he had to pass. The flames were fed by branches of certain bushes that are native to Egypt—the Egyptian Thorn, Gum Arabic, and Tamarind. Although, at first sight, it seemed that there was one great fire, if the neophyte had the courage to approach it, he saw that this was an optical illusion; in reality, there were two smaller fires, with a narrow passage between them, through which he could slip rapidly…
To be continued…