The Life of a Master in the West, Part 1/4
Higher forms of Clairvoyance, Part 3/4
Meeting his Master, Peter Deunov, Part 2/4

“…Between the ages of fifteen and seventeen Mikhaël was to know the joy of frequent mystical experiences, and by the time he met the spiritual guide who was to accompany him on the physical plane, he would have gathered all his forces, tested his capacities, and purified his whole being.

But at seventeen, he was alone with his sublime ideal, and the realization that there were none to share it often distressed him deeply. How could these truths have such an effect on him and none at all on others, he wondered? When he saw their indifference to the beauty of the spiritual life, he blamed himself for being unable to convince them. ‘I felt so small and inadequate,’ he confessed one day; ‘I was sure I was not intelligent enough to convince them.’

One day in Varna, Mikhaël saw a man of medium height and vigorous appearance coming rapidly toward him. In an instant he had passed, but not before Mikhaël had glimpsed his face. Moved to the depths of his being, he murmured to himself: ‘That must be Peter Deunov!’ The face he had seen expressed such nobility that it could belong only to him. Incapable of thinking of anything else, he made inquiries which confirmed his intuition. It was truly Peter Deunov. Without hesitation, Mikhaël set out for the hotel to make the acquaintance of the author whose writings had so inspired him. 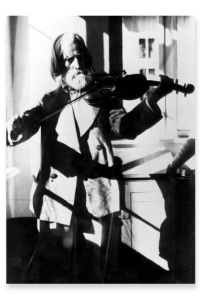 When he was shown into his room, he saw a grey-haired man whom he recognized instantly as the one who had passed him in the street. He was sitting at a table playing the violin, while the person with him sang softly in accompaniment. ‘When you knocked,’ said Peter Deunov, ‘we were singing a song that I am composing. You can sing with us.’ A little taken aback by this unexpected greeting, Mikhaël obediently sat down and tried to sing with them, but his vocal cords refused to make a sound.

Without seeming to notice Mikhaël’s embarrassment, Peter Deunov continued to play his violin, humming the melody with the young woman, who was a member of the brotherhood he had founded. Gradually Mikhaël recovered his composure and began to sing with them. When the song was complete and written down, Peter Deunov laid his violin on the table, turned to his guest, and engaged him in a lengthy conversation.

Mikhaël’s hunger for clear and honest explanations was at last satisfied, and he would say years later that from the first time he met Peter Deunov there had been an ‘inexplicable bond’ between them. It was as though they had recognized each other. Mikhaël was eager to learn Peter Deunov’s opinion on many subjects, particularly on the question of clairvoyance. By then he already knew a good deal about spiritual, extra-sensory, and occult phenomena and was familiar with the philosophy of several initiatic schools of both East and West…”

Louise-Marie Frenette,
Introduction, The Life of a Master in the West  (Amazon, ‘look inside’)
‘Flip through’  at Prosveta bookshop

FacebookTwitterLinkedInRedditGoogle+TumblrPinterestVkEmail
The Life of a Master in the West, Part 1/4
Higher forms of Clairvoyance, Part 3/4