…”Sylphs, on the other hand, live mainly in forests and up in the mountains. They are much bigger than humans, their appearance is extremely majestic and they are gifted with great intelligence. Sylphs are the friends of philosophers and thinkers and sometimes become their instructors. They can move about as they please and have the power suddenly to change their face or their size. They work on clouds, fashioning them into all kinds of forms, and those who know how to read these cloud formations learn a great deal from them and can even read the future in them. 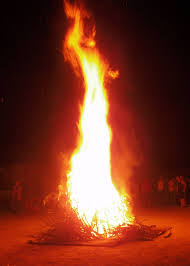 It is much more difficult for humans to communicate with salamanders. Only mages and initiates are capable of making friends with them, and thanks to this friendship they can obtain great power and learn to produce fire and release thunderbolts. Salamanders live in fire, for the matter of which they are composed consists principally of igneous particles.

It is possible for men and women to communicate with all these creatures that dwell in trees and in rocks, lakes and rivers. Generally speaking, they live for a very long time, but they do not have an immortal soul as humans do. Some of them long to be immortal and try to have a relationship with human beings, because that is the only way they can gain immortality.”

To be continued – The Spirits of Nature