– The aura has exactly the same functions as the skin
Everything that exists – be it human beings, animals, plants or even the stones in the ground – is surrounded by its own subtle, fluidic atmosphere made up of the particles and emanations it is constantly giving.. It is this atmosphere that constitutes the aura. A kind of halo which surrounds every human being.

It serves several important purposes, first amongst them being that of protection.  Another function of the skin is to serve as an organ of exchange… And finally, the skin serves as a sense organ which enables us to experience sensations of heat and cold, contact with other bodies, pain, and so drawing a parallel between the skin and the aura.

The aura has exactly the same functions as the skin. It is the skin of the soul which it surrounds and protects; it is also its sense organ and, finally, it is the means of communication which enables the soul to receive the cosmic currents flowing through space and to communicate and exchange with others: … the aura can be compared to the earth’s atmosphere. Who could ever say how many times the earth has escaped destruction during the course of its journey through space, thanks to its atmosphere?

Thanks to our aura, therefore, we benefit from a continuing relationship of reciprocal exchange with the forces of nature. The cosmic, planetary and zodiacal influences ceaselessly flowing through space reach out to touch us, and depending on the purity and sensitivity of our aura and the colours it contains, we may capture or fail to capture certain specific forces. 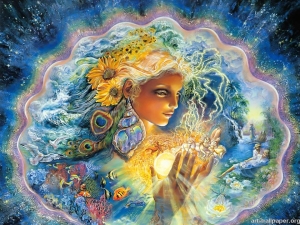 Our aura, therefore, is like an antenna, it is an instrument which detects and receives messages, waves and forces coming to us from the length and breadth of the universe. Although we distinguish the different functions of the aura, in practice they are closely linked: sensitivity, exchange and protection all function at once.

The factors which contribute to the quality of our aura are exactly the same as those which influence the quality of our skin. What gives the skin its particular qualities? The overall physical and psychic condition of the person’s organism. Man makes his own skin. Yes, a person’s skin reveals a great deal about its owner. Human’s entire destiny depends on their skin, because it has a determining influence on their relations with other human beings and with the world at large.

Every detail of your skin has significance. Its consistence (whether it is smooth and supple, hard, flabby or soft) reflects your essential qualities and characteristics: perseverance, will-power and activity or frailty, laziness and failings. The whole of a humans’ destiny, all their triumphs and all their failures, are expressed in their skin…

The shiny flower on the main image produced using the Kirlian Technique, was taken by American photographer Robert Buelteman.