Learn to find nourishment in light, Part 2/3
Art and Poetry need to be lived
The Emerald Tablet – Its fascinating history, Part 3/3

“Hermes Trismegistus said, ‘That which is below (that is, in the depths of the earth) is like that which is above’ (that is, in the heavenly regions). Everything that happens below is an exact reproduction, a faithful reflection, of what exists above. No one has ever stated this as well as Hermes Trismegistus. His Emerald Tablet is still the most perfect monument that any intelligence has ever bequeathed to mankind. Only one text can compare with the Emerald Tablet (can even be said to surpass it) and that is the prayer that Jesus gave us, the Lord’s Prayer. As a matter of fact, the Lord’s Prayer is a variation of the Emerald Tablet.”
(A New Dawn, Vol. 26, Chap.6)

“Hermes Trismegistus plumbed the depths of nature’s mysteries, and his Emerald Tablet is a summary of the whole body of ancient wisdom. But even the alchemists failed to understand him.”
(The Splendour of Tipharet, Vol. 10, Chap.14) 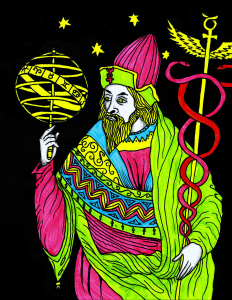 The Emerald Tablet of Hermes, is also referred to as the Emerald Tablet of Thoth or the Smaragdine Table. The text of the Emerald Tablet names its author as Hermes Trismegistus (“Hermes the Thrice-Greatest”). Hermes Trismegistus is a combined representation of the Greek god Hermes and the Egyptian god Thoth. In Hellenistic Egypt, the Greeks recognised the congruence of their god Hermes with Thoth. Subsequently the two gods were worshipped as one in what had been the Temple of Thoth in Khemnu, which the Greeks called Hermopolis.

The first known existing written reference to the Emerald Tablet is in a book written in Arabic between the sixth and eighth centuries. The text was first translated into Latin in the twelfth century. Numerous translations, interpretations and commentaries followed. A translation from the Latin by Isaac Newton (see below), is found among his alchemical papers that are currently housed in King’s College Library, Cambridge University.

As a divine source of wisdom, Hermes Trismegistus was credited with tens of thousands of sacred texts, reputed to be of immense antiquity. They are known as the Hermetic Corpus and form the basis of Hermeticism. They chronicle the journeys of Hermes Trismegistus from the times of Atlantis until the times of Khem (Egypt). Plato’s Timaeus and Critias state that in the temple of Neith at Sais, there were secret halls containing historical records which had been kept for 9,000 years. Clement of Alexandria was under the impression that the Egyptians had forty-two sacred writings by Hermes, encapsulating all the training of Egyptian priests.

Many early Christian writers considered Hermes Trismegistus to be a wise pagan prophet who foresaw the coming of Christianity. They believed in a prisca theologia, the doctrine that a single, true theology exists, which threads through all religions, and which was given by God to man in antiquity and passed through a series of prophets, which included Zoroaster and Plato. In order to demonstrate the verity of the prisca theologia, Christians appropriated many Hermetic teachings.

According to ancient Arab genealogists Hermes Trismegistus also has a major place in Islamic tradition. Hermes Trismegistus is mentioned in the Qur’an in verses 19:56-57: “Mention, in the Book, Idris, that he was truthful, a prophet. We took him up to a high place”. This Idris was the ‘Master of Masters’, Hermes Trismegistus, the infallible Prophet who travelled through space from Egypt, to heaven, from where he brought with him Adam and the Black Stone when they landed on earth in India. The knowledge of Hermes Trismegistus was considered sacred, and an inheritance of the Ahl al-Bayt. 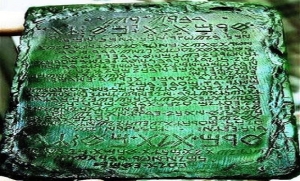 This is the Isaac Newton translation:

Alexander the Great became an Egyptian pharaoh when he conquered Egypt in 332 BC –. As pharaoh, he gained access to all the treasures of Egypt, including the whereabouts of Hermes’ (Akhenaten’s) tomb. Convinced it was his destiny to reveal the ancient secrets, Alexander immediately headed across the Libyan desert to an ancient temple at Siwa near where the tomb was located. According to Albertus Magnus and others, that is where Alexander found the Emerald Tablet.

Alexander took the tablet and scrolls he found in the tomb to Heliopolis, where he placed the scrolls in the sacred archives and put the Emerald Tablet on public display. Construction of the city of Alexandria to house and study the Hermetic texts was begun immediately, and he assembled a panel of priests and scholars to prepare Greek translations.

One traveller, who had seen it on display at Heliopolis, wrote: “It is a precious stone, like an emerald, whereon these characters are represented in bas-relief, not engraved. It is esteemed above 2,000 years old. The matter of this emerald had once been in a fluid state like melted glass, and had been cast in a mould, and to this flux the artist had given the hardness of the natural and genuine emerald, by his art.”

When Alexander left Egypt, it has been suggested that he took the original tablet with him and hid it for safekeeping before going on to conquer Babylonia and India. Meanwhile, copies of the tablet became primary documents at Alexandria, and according to some reports, scholars issued revised Greek translations in 290 BC, 270 BC, and 50 BC.

Several papyri in the British Museum mention a canon of Egyptian teachings that included the writings of Hermes that was still in existence at the time of Clement of Alexandria (around 170 CE). Fortunately, before Alexandria’s libraries were destroyed in successive burnings by the Romans, Christians, and Muslims, copies of the Emerald Tablet had made their way into Arabia and from there eventually reached Spain and Europe.

FacebookTwitterLinkedInRedditGoogle+TumblrPinterestVkEmail
Learn to find nourishment in light, Part 2/3
Art and Poetry need to be lived