The Four Cardinal Festivals during the year

Becoming an Initiate; in the new millennium, Final
The Power of Fire
The Four Cardinal Festivals during the year

In the course of a year, as the sun moves round the circle of the zodiac, it travels through the four points known as the equinoxes and the solstices. The equinoxes correspond to the two days of the year when the sun crosses the equator and day and night are of equal length. these two days are March 21 and september 21. the solstices, on the other hand, correspond to the two days on which the angle between the sun and the equator is at its maximum. these are December 21, the winter solstice and the shortest day of the year, and June 21, the summer solstice and the longest day of the year.

To these four points in time, the solstices and the equinoxes, correspond four so-called cardinal feasts: Christmas, Easter (Springtime), St John’s and Michaelmas. These feast-days were instituted by the initiates as a reminder to human beings that, on those days, the sun sets particularly powerful currents in motion in the universe and that, if they are aware of them, human beings can draw on these currents and use them to advance their evolution. The passage from one season to the next occurs at these four points, each of which is a nexus of extraordinary forces proper to each season. The seasonal forces are organized and regulated by very powerful spirits, under the command of which are many lesser spirits whose task is to distribute these energies and forces to every part of the planet.

You should not think that everything happens automatically in nature; on the contrary, a whole host of spirits are actively involved. some of them have been specially entrusted with the care of rocks, plants, animals and humans, and all the seasonal changes that occur are the result of their activity. 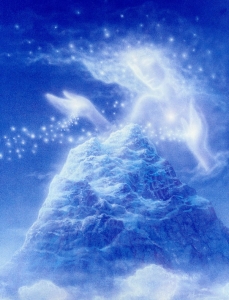 Each of these festivals has a corresponding cardinal point, season, archangel and planet. The Easter festival is in relation to the coming of spring, over which Archangel RAPHAEL presides; his name means ‘God the healer’ or ‘divine physician’. This archangel represents Mercury and rules over the south. It is Raphael who gives orders to the entities under his command to work with the world’s vegetation and to distribute the forces of growth and regeneration.

St John’s day, with its fires, marks the beginning of summer; it is the season of Archangel URIEL, who represents the earth and rules over the north. The summer solstice is ruled by Archangel Uriel, an archangel of light; his name means ‘God is my light’. The feast of st John (on June 24) coincides with the moment when the sun enters Cancer – the sign in which Venus is in exaltation – and this is no chance coincidence, for the feast of st John is the feast of fire, the feast of the summer heat, which ripens fruit and all other things in nature.

Michaelmas marks the beginning of autumn; it comes under the influence of Archangel MICHAEL (his name means ‘Who is like God’) who represents the sun and rules over the east. Archangel Michael holds sway over the forces of balance and justice and, consequently, over the forces that enable us to distinguish between good and evil in order to free the good and transform the evil.

Christmas marks the beginning of winter; it is dedicated to the forces of Archangel GABRIEL (his name means ‘God is my strength’) who represents the moon and rules over the west. Archangel Gabriel commands the forces that have the property of condensing matter. If the influence of the moon had not been counterbalanced by other influences, it would have materialized and petrified everything that exists: plants and animals as well as people.

The equinoxes and solstices or, as I have called them, the four cardinal feasts, are the four most vital days in the year, and they are governed by Mercury (spring equinox), Venus (summer solstice), the Sun (autumn equinox) and the Moon (winter solstice).

Omraam Mikhael Aivanhov
The Fruits of the Tree of Life, The Cabbalistic Tradition

FacebookTwitterLinkedInRedditGoogle+TumblrPinterestVkEmail
Becoming an Initiate; in the new millennium, Final
The Power of Fire