The moon and its influence on humans

The Animal Kingdom, the Kitten
We attract the leaders we deserve
The moon and its influence on humans

– Human beings are like plants in reverse
Tradition tells us that the moon exerts a very special influence on the earth – not only the magnetic influence on tides, plants and the female cycle that we are all familiar with, but also a magic influence. The moon always has the same face turned towards the earth, and what no one knows is that the hidden face of the moon is a veritable hell, a dumping-ground for all the evil done by humankind, and that all this evil could, one day, be unleashed on the earth.

But let’s look at an aspect of the moon which has great importance in our daily lives. We say that the moon waxes and wanes. in reality, of course, this is simply a manner of speaking, just as we say that the sun rises and sets. the moon itself is always the same, but we on earth see it waxing or waning depending on its relative position to the sun and the earth. it waxes for fourteen days, and then for another fourteen days it wanes. These phases of the moon produce changes not only in the oceans and in the animal and vegetable kingdoms, but also in the biological, intellectual and psychic life of human beings and even of societies.

The moon’s phases affect all creatures. As long as we are on earth and have a physical body, we are necessarily subject to the influence of the sun, the moon and the other planets. Even initiates are subject to these influences, the only difference being that, for them, their effect is not negative. When I was young I was extremely sensitive to the influence of the moon; today, it still affects me, but not in the same way. I never need to consult an almanac to know whether the moon is waxing or waning; my own body tells me. 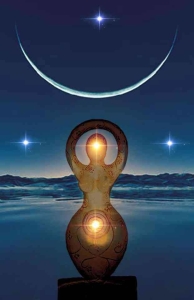 During the waning moon, therefore, observe what goes on inside you; keep an eye on yourself, and don’t embark upon any important new venture, for you may not have enough energy to carry it through to the end. You must realize, also, that the only really pure energies we can draw on are those from above. Human beings are like plants in reverse: their roots are above, in heaven; their brain does the work of the roots by drawing strength from the causal plane.
The brains of plants, on the other hand, are their roots, which are buried in the soil; their leaves are their lungs, and their flowers are their reproductive organs. A plant whose roots have not done their work properly cannot produce fruit. Very often, in fact, if a tree has no fruit, it is because its roots are inhibited in some way. Similarly, a human being will be unproductive and incapable of manifesting themselves on the physical plane if their brain does not draw strength and vitality from heaven. 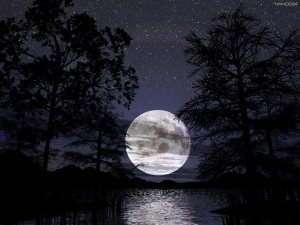 To conclude, let me remind you that the different phases of the moon can always be used for spiritual work. Suppose, for instance, you want to improve your will-power or your health, or to possess greater wisdom, love or light: wait until the moon is waxing, then at night you look at it, raise your right hand and say, ‘Just as the moon grows full in the heavens, so may my whole being be filled with health and vigour – or with love, light, etc. – so that i may become a true servant of God.’ You should repeat the formula three times. If you do this exercise frequently and regularly, you will see results, because it is a magic rite, and magic is always effective, always powerful.
And when the moon is on the wane, you can use the opposite formula: ‘Just as the moon is waning and fading in the heavens, so may such and such a vice or weakness diminish and disappear, for the glory of God.’ Here, too, you should repeat the formula three times, with your right hand raised. Initiatic science teaches us to use absolutely everything for our own advancement and perfection.
– The Bonfin, 16 August 1966

Omraam Mikhael Aivanhov,
Complete Works Vol. 32, The Fruit of the Tree of Life, or the Kabbalistic Tradition

FacebookTwitterLinkedInRedditGoogle+TumblrPinterestVkEmail
The Animal Kingdom, the Kitten
We attract the leaders we deserve