The Over-Soul – in the ancient traditions, Part 2/3

-The principle of the  Over-Soul exists in the ancient traditions of East and West
Later, it is true, I sometimes asked myself how it was that this little booklet of perhaps twenty pages was able to turn my world upside down. It was then that I had the revelation of beauty. Yes, I saw true beauty, the beauty of light, the beauty of colours, the beauty of vibrations, the beauty of the structure and harmony of the universe, the beauty of God himself, and this has marked me forever.

From that day I wanted to live in that beauty, which for me blended with the idea of God. I could waver no longer. How could I doubt what I had lived? I did not have the time to ponder on what I ought to do. Firstly, there was nothing to reflect on; I was living in light, and around me, people, animals, the earth, the trees, the stars, everything was transformed! I was content to walk forward without fretting over where exactly I was going, because of this strong sensation of the light permeating everyone and everything.

At such a time, I can tell you, there is nothing to reflect on: what is beautiful is beautiful, what is luminous is luminous, what is divine is divine. You do not need years and years to understand, for your consciousness is illuminated instantaneously. At that moment, your soul and your spirit are speaking, and the decisions you have to take are instantaneous and irrevocable. 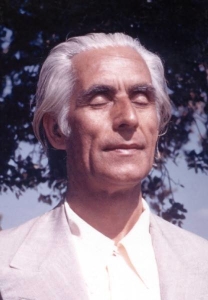 That is why, later on, my life could not have unfolded in any way other than it did. Obviously, just because we receive a lightning flash from heaven does not mean we are immediately transformed. No, the heavenly fire in us does not make us instantly omniscient, omnipotent and perfect. It gives us a vision; it sets our hearts and souls ablaze, and then it is up to us to work with it, so as to develop ourselves perfectly.

Certain aspects of all that I lived during this period of my life I found echoed in the books of great mystics such as Master Eckhart, Ruysbroek the Admirable, St Francis of Assisi, St Catherine of Siena, St Marguerite-Marie Alacoque, Jakob Boehme, St Teresa of Avila, St John of the Cross, St Thérèse of the Infant Jesus and many others. Suddenly, you are dazzled, you feel, you understand. This cannot be explained – these raptures, these ecstasies that a soul experiences cannot be explained, and they have nothing to do with people’s intellectual level: Jakob Boehme was a shoemaker.

Because I have experienced these states, I understand the true mystics, and I can also distinguish them from other states, those that are claimed to be mystical and which are, in fact, nothing but hysteria.

These notes refer to links between Eastern and Western traditions and illustrate some universal principles.

Note 1. courtesy Wikipedia:
“For Emerson the term Over-Soul denotes a supreme underlying unity which transcends duality or plurality, much in keeping with the philosophy of Advaita Vedanta. This non-Abrahamic interpretation of Emerson’s use of the term is further supported by the fact that Emerson’s Journal records in 1845 suggest that he was reading the Bhagavad Gita and Henry Thomas Colebrooke’s essays on the Vedas.”

“Over-Soul” has more recently come to be used by Eastern philosophers as the closest English language equivalent of the Vedic concept of Paramatman. (In Sanskrit the word param means “supreme” and atman means “soul”; thus Paramatman literally means “Supreme-Soul”.

Note 2. courtesy Wikipedia:
Advaita Vedanta is the oldest existing sub-school of Vedanta, an ancient Hindu tradition of scriptural exegesis and religious practice, and the best-known school of advaita, the nonduality of Atman and Brahman or the Absolute. It gives “a unifying interpretation of the whole body of Upanishads” providing scriptural authority for the postulation of the non-duality of Atman and Brahman.

Advaita (not-two in Sanskrit) refers to the recognition that the true Self, Atman, is the same as the highest Reality, Brahman. The key source texts for all schools of Vedānta are the Prasthanatrayi, the canonical texts consisting of the Upanishads, the Bhagavad Gita and the Brahma Sutras, of which they give a philosophical interpretation and elucidation.

Advaita Vedanta developed in a multi-faceted religious and philosophical landscape. The tradition developed in interaction with the other traditions of India: Jainism, Buddhism, Vaishnavism and Shaivism, as well as the other schools of Vedanta.

Note 3. courtesy Wikipedia:
The word stem paramātma (परमात्मन्), is formed from two words, parama, meaning “supreme” or “highest”, and ātma, which means individual spirit or soul or self.

FacebookTwitterLinkedInRedditGoogle+TumblrPinterestVkEmail
The Over-Soul – struck by a lightning bolt, Part 1/3
The Over-Soul – a case of ‘love at first sight’, Final 3/3