”The sympathetic nervous system of man consists of a chain of nerve centres running from the brain to the base of the spinal cord, and a peripheral series of nerves and ganglia connected by a network of nerve-fibres known as plexuses. The solar plexus, located behind the stomach, is one of these.

Now, if you refer to Figure 1 above, you will see that the ganglia of the sympathetic nerve system are grouped as follows: 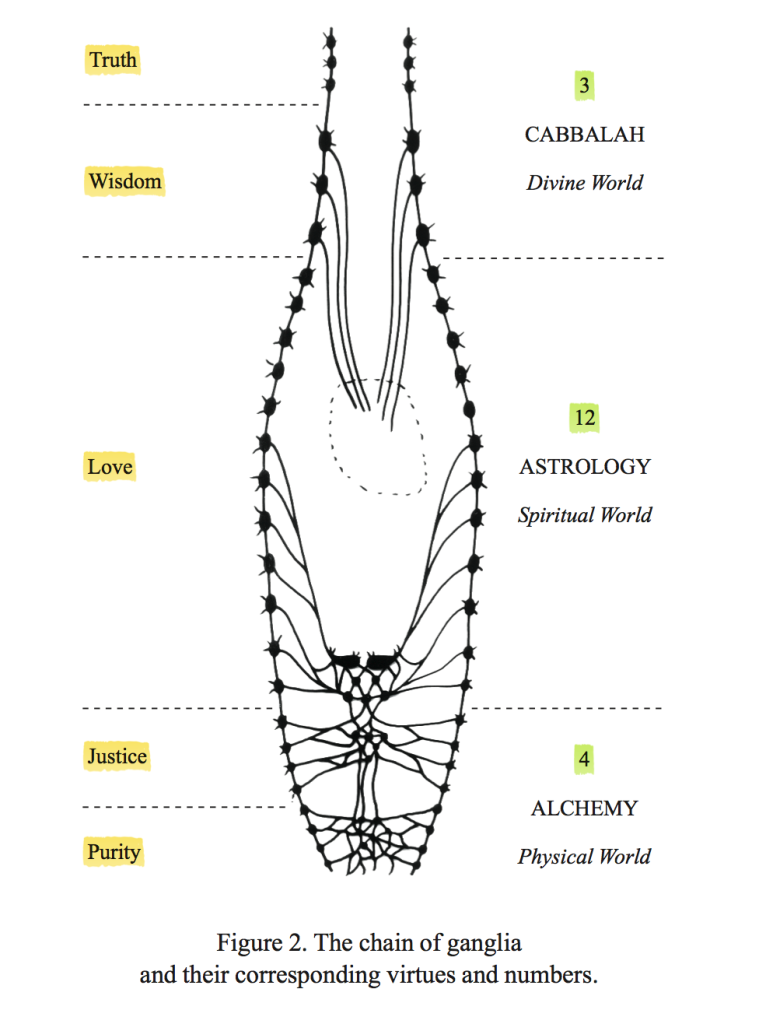 And now let’s have a closer look at each of these groups (Figure 2 above,).
* First of all, we have two sets of 3 pairs of cranial ganglia: Three always stands for the Divinity; it is the number of the Cabbalah, for the Cabbalah reveals the factors, the active Principles in the universe. The CABBALAH answers the question, ‘Who?’. Who creates? Who is at work in the universe?

* Then there are 12 pairs of dorsal ganglia, and Twelve represents nature ruled by the stars. It is the number of Astrology (the twelve Constellations of the Zodiac) which studies the influence of the heavenly bodies on men and the functions of the cosmic organs. ASTROLOGY is linked to our respiratory and circulatory systems. Astrology answers the question, ‘When?’.

* And finally we have two sets of 4 pairs of lumbar and sacral ganglia; Four is the number of Alchemy because it represents the four states of matter, earth, water, air and fire. ALCHEMY answers the question ‘What?’.

These 26 pairs of ganglia in the sympathetic nerve system, therefore, are divided into five groups which correspond to the five virtues represented by the pentagram: purity, justice, love, wisdom and truth.1 (see Figure 3). 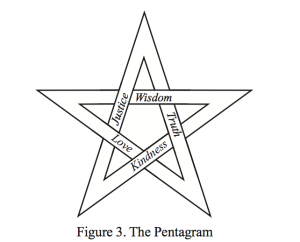 PURITY is linked to the four pairs of sacral ganglia at the base of the chain of ganglia, for purity is the base, the Foundation.
JUSTICE corresponds to the four pairs of lumbar ganglia (located in the region of the kidneys which are related to Libra, the symbol of equilibrium) which are connected to the digestive organs (stomach, liver, intestines, etc). When someone does not eat wisely, the balance is upset, the two pans of the scales are no longer level and the resulting problems show that justice has had to intervene to restore order.
LOVE is linked to the twelve pairs of dorsal ganglia. Love is a force which expands one’s being (this is reflected in the act of breathing); a force which links us to all other beings, to the whole universe, symbolized and represented by the twelve Constellations of the Zodiac.
WISDOM is connected to the three pairs of cervical ganglia which are linked to the heart by means of the cardiac nerves: true wisdom comes from the heart.
TRUTH is linked to the three pairs of cranial ganglia, for truth is the summum, the goal of all our endeavours. Truth is above everything else.

Truth, wisdom, love, justice and purity are our points of contact with the harmonious forces of the universe from which we receive so many blessings. Each one of these virtues enhances the functioning of the ganglia or organs to which it is linked, just as each and every fault against these virtues upsets that functioning.”

FacebookTwitterLinkedInRedditGoogle+TumblrPinterestVkEmail
Books Relating to the SynoSphere
The Solar Plexus, Part 3