The Sun, Centre of our Universe – Surya Yoga, Part 1/7

Our relationship with our cells
The sun, ‘Land of the Living’, Part 2/7
The Sun, Centre of our Universe – Surya Yoga, Part 1/7

– Surya Yoga, the yoga of the sun
These days, yoga has become a popular subject of discussion. In fact I have sometimes talked to you myself about all the different types of yoga that come principally from India and Tibet, but also from China, Japan, Egypt and Persia. All religions have their own form of yoga, even Christianity.

Yes, Christians have always practised adoration, prayer, contemplation, devotion and love of God. In fact, these are the foremost characteristics of the Christian religion, and in India this is known as Bhakti-yoga, the yoga of devotion, adoration and spiritual love.

This form of yoga suits certain temperaments better than others; some people have different gifts and qualities and need to express and develop them in other ways. The paths that lead to the Creator are without number, and although Christians have limited themselves to one way (and we must not criticize it, for it is a very wonderful way), the Hindu tradition is richer in that it teaches many different methods.

For those who are given to study and philosophical reflection and like to work with the mind, there is the yoga of knowledge: Jnana-yoga, the way to God through the use of one’s intelligence.

Others have no philosophical or scientific bent and do not feel the slightest desire to fall on their knees in adoration or contemplation, but they have will-power and abundant energy and the desire to work and serve others with selflessness. For them there is Karma-yoga, the yoga of good works, of achievements on the physical plane, of duty to be done without hope of payment or reward. Karma-yoga is the yoga of gratuitous, altruistic service.

For those who want to control themselves and master their instincts and impulses and the tendencies of their lower nature, there is Raja-yoga: through concentration and self-control, they too seek to lose themselves in the Almighty. They become the kings (raja means king) of their own inner kingdom. 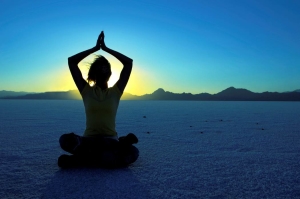 Kriya-yoga is the yoga of light. This is the yoga of the great Babaji, and it consists in thinking of light, of getting to know and understand light and colours, and of drawing them into oneself and projecting them all around. It is a magnificent way to work.

Hatha-yoga is for those who want physical exercise, who enjoy adopting the postures or asanas as they are called. Hatha-yoga is the type of yoga most widely known in the West. Unfortunately, however, Westerners do not have the same temperament or constitution as Orientals…

Agni-yoga is the yoga of fire in which one thinks of fire, works with fire and kindles the fire within. Since fire is at the origin of the whole of creation, Agni-yoga is yet another path to God.

Shabda- or Mantra-yoga is the yoga of the Word. It consists of pronouncing certain formulas or mantras at certain specific moments, a certain number of times, with a certain degree of intensity. Words possess power, and he who knows how to use that power can obtain beneficial results.

And now I want to talk to you about a form of yoga which surpasses all others: the yoga of the sun. This form of yoga was well known in the past; the Greeks and Egyptians practised it, as did also the Persians, Aztecs, Mayas and Tibetans. But nowadays it is almost abandoned, especially in the Western world. The name `Surya-yoga’ comes from the Sanskrit word for sun: Surya. This is the type of yoga I prefer above all others, for it includes and sums up all others. Yes, why not combine all the different types of yoga into one?

Disciples of the Universal White Brotherhood must break out of the narrow, limited ways of the past. They represent the new humanity who must grow and develop in every domain.
They  should act with absolute selflessness, and this is Karma-yoga. They should love, seek and adore God, and this is Bhakti-yoga. They should meditate and practise concentration, so as to rule over themselves and their population of cells, and this is Raja-yoga. When they are sitting perfectly still and meditating, or executing the movements of our gymnastics or dancing the Paneurythmy, they are practising a form of Hatha-yoga.

When they mentally surround themselves with light and colour, and work to build up a brilliant, luminous aura, they are practising Kriya-yoga. When they fix their mind on fire, calling on it to burn away all their impurities, this is Agni-yoga. They are practising Shabda-yoga when they strive to control every word they utter, and to be constantly on their guard not to say anything that might cause divisions amongst men or infect them with doubt or despair; they endeavour, on the contrary, to use their faculty of speech to create new life.

Finally, when they focus all their attention on the sun, loving it and seeking to unite with itw, seeing it as the gateway to heaven, the manifestation of Christ, God’s representative, they are practising Surya-yoga.

Disciples who practise Surya-yoga reject none of the other kinds of yoga; on the contrary, they use them to become a whole being and fulfil themselves in every way.

FacebookTwitterLinkedInRedditGoogle+TumblrPinterestVkEmail
Our relationship with our cells
The sun, ‘Land of the Living’, Part 2/7