Why is meditation such a difficult exercise for most human beings?
Because they don’t know what thought really is or how to use it. They imagine that they can enter the world of silence just like that, without any previous experience or preparation and with a noisy instrument which can only disturb the silence.

The region of pure thought is the causal plane, that is to say, the higher mental plane, and the further away it is from this lofty plane, the more distorted and restricted thought becomes. Only when it is on high is thought all-powerful. As soon as it descends to the level of the intellect (the lower mental plane) and the heart (the astral plane), it is smothered in all kinds of impurities, and once deprived of much of its virginal perfection, it loses almost all its powers of penetration.

If you want your thought to recover all its power so that you can meditate and make contact with heaven, you must rise to the causal plane in which absolute silence reigns. In this state of peace and harmony your thought is free to wing upwards, to fly through space, to soar away in the ocean of light. Nothing can restrain the movement of its powerful wings any longer. 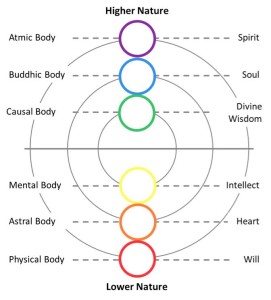 As long as you stagnate on the astral and lower mental planes, you will always be tense and restless; you will never achieve the silence required for spiritual work. It is important to know the exact nature of each thing. Just as chemists study the nature and properties of the physical elements, you must study the nature and properties of the psychic elements, and in doing so, you will see that it is in the nature of egotistical, self-centred thoughts and feelings to create a state of inner tension, restlessness and disorder.

To think is, first and foremost, to be capable of freeing oneself from one’s everyday concerns in order to concentrate disinterestedly on something of a philosophical or spiritual nature. Only in the midst of silence can the age-old knowledge buried in the depths of our being rise, little by little, to the surface of our consciousness.

So try to acquire the habit of daily periods of concentration and meditation and begin to take pleasure in them. And you can gradually prolong them until you are truly capable of entering the heavenly regions and of working there, of touching, stirring up and moving materials and currents in every corner of the universe.

Thought enables us to understand, but it also enables us to act. It is more than a faculty to be used exclusively for the acquisition of knowledge; it is the key to everything, the true magic wand, the instrument of omnipotence.

FacebookTwitterLinkedInRedditGoogle+TumblrPinterestVkEmail
The mystery of love
Destiny and Reincarnation, Part 1/7