Women’s role in the coming age

‘Sensing all the dangers that threaten the future of humanity, many people say that their greatest concern is to work for future generations. If they really want to work for the generations to come, they should first of all think about how they bring children into the world.  That is much more important than concerning themselves with the material conditions they will live in. It’s true that more and more doctors, nurses and psychologists are taking an interest in the gestation period. Acknowledging that the child is already a conscious being in its mother’s womb and that the mother can communicate with it and exert influence over it is a great step forward.

A pregnant mother should become aware of the power she has over her child well before its birth. It is not enough that she already loves the child; she has to learn to make use of the powers of love. While thinking of her child, it is possible for the mother to send her love all the way to the sublime realms to gather the elements necessary for the child to evolve well and then to instil these into it. How can a mother believe that her own resources will be enough to give her child all it needs, without having to look elsewhere, above, on the spiritual plane? 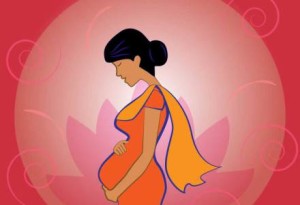 So, now and then, for a few minutes several times a day, a mother should stand before God in thought and prayer and say to him, ‘Lord, I want this child you are giving me to be your servant. But for that to happen, I need other elements, which are only found in you: please give them to me.’ You will say it isn’t easy to stand before God. Of course it isn’t, but it’s just a manner of speaking. Just by thinking of beauty, light and eternity, that mother will be attracting higher subtle elements and passing them on to her child.

Women are still not sufficiently aware of the power they have for the future of humanity. They are stronger than all the material means that can be brought into play to counter the threats hanging over the future. What they do not know is that the future of humanity is actually in their hands. And for this reason, during the nine months that the mother carries her child, she should  do her best, in her thoughts and feelings and with the help of the child’s father, to fashion a being who will later be able to bring peace, harmony and light.’