Zodiac Belt explains the destiny in our horoscope Part 4/7

The circle with a dot in the centre is the pattern on which everything in the universe is built. Take any organism, a cell for instance: at the centre is a nucleus which is surrounded by protoplasm and the whole is wrapped in an outer membrane.

Part 4 of a series of extracts from the Master’s lectures, on the subject of the Zodiac

Take a fruit: in the centre you have a core or stone, then the surrounding pulp, the juicy, edible flesh and, on the outside, the skin or shell. Every living organism exists on the same pattern, with a centre or core, a surrounding space in which life circulates and, finally, a skin which serves as a limit or boundary and enables the law of echo reflection to come into play.

Now it may well happen that the distance between the centre and the periphery is so great that the ‘voice’ has to carry a long, long way, and years go by before it bounces back from the outer boundary. But the fact that the rebound is not felt immediately must not mislead you into thinking that it will never come. It will! There’s no escaping it.

But it may come much, much later, perhaps only in some future incarnation, because the outer limit, the wall against which it bounces, is so far away. And this is how we can explain the destiny written in our horoscope: it is the consequence of our past actions. The atom and the solar system are identical in their basic structural design: a circle with a dot in the centre. And the area surrounding the central dot represents space. Without space matter cannot exist, whereas the spirit does not need space. 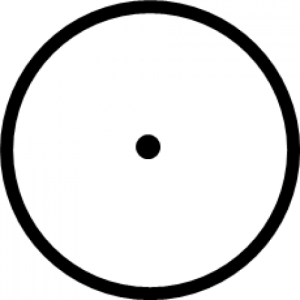 The power of the spirit lies in the fact that it is a point without extent or dimension and it can, therefore, be actively present everywhere.

So everything that occurs travels out through the space occupied by matter until it bumps up against its outer limits and starts on the return journey to its starting point. Everything we do and think, therefore, comes back to us after travelling through matter to the outer limits of space and back. It is matter that reflects the echo; not the spirit. The spirit acts and matter reacts. Matter responds to an impulse. Its role is to stand up to the spirit, to oppose and limit the spirit, to imprison it, even.

And the Zodiac is the belt, the wall, that surrounds and imposes a limit on our universe just as the serpent of matter holds the spirit prisoner in its coils.”

Main Image: ‘The Zodiac of Dendera’, with images of Taurus and Libra, from the Hathor temple at Dendera, Egypt, now in the Louvre, Paris.

Omraam Mikhael Aivanhov
Izvor Book 220, The Zodiac, Key to Man and the Universe
Chap.1, The Enclosure of the Zodiac
http://www.prosveta.com/api/flipping/P0220AN