… Further south, at Tiruvannamalai, I went to the ashram of Ramana Maharshi  about whom Paul Brunton had written in his book, ‘Secret India’ that such a light emanated from him, such love, such joy, that the colour of his skin was like gold. Unfortunately, Ramana Maharshi had also died by the time I visited his ashram, but his disciples were still there. They were truly like their Master, full of love, full of light, full of smiles, and they welcomed me royally! They kept their Master’s room as a sacred place where no one was allowed to enter, but they did allow me in to meditate for as long as I wished, and I was able to communicate with his soul.  What unforgettable memories I have to this day of that ashram! 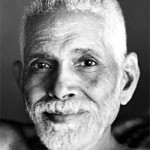 Years later, I met Paul Brunton, who came to see me at the Bonfin, and it was such a pleasure to talk with him.
… In most of the temples I went to, I would see the symbol of Shiva represented, the lingam, an upright shaft on a horizontal support. Hindus prostrate themselves and meditate devoutly before it, and the women often come to place flowers on it.  Sometimes I asked them about this symbol, and I realized that most of them had only the most superficial understanding of it. They went no further than seeing the upright shaft as a representation of the phallus, the organ of procreation, the masculine principle. I said to them: ‘No, you haven’t described it all; underneath that upright shaft there is a horizontal base, which represents the feminine principle.

The masculine principle is spirit, which works on the feminine principle of matter. All creation is the result of this work of spirit on matter. In this symbol your rishis have united the two principles to show you that creation can happen only when both principles are there, not separate but united.’