When I went to southern India, I went to Madras where I visited the Theosophical Society, set in magnificent grounds with parks reaching right down to the sea. I went to Pondichery to the ashram of Sri Aurobindo, whom I would love to have known, for he was a remarkable man, but he had died a few years before. 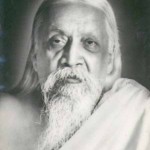 As everyone knows, a Frenchwoman succeeded him. She is called Mother. Each morning, before sunrise, she would come out onto her balcony before a crowd of people, who contemplated her reverently. She would greet them with a gesture and then go back inside.
One day there was a festival. On this occasion she sat in a room and, one by one, those who wanted to passed in front of her. She gave a handkerchief to each one of them. I was among the crowd and, when I found myself in front of her, as she handed me the handkerchief I looked deeply into her eyes with much love.
As she spoke French, I wanted at least to say to her that I was happy to meet her and to come to her ashram. But, at that moment, I do not know what happened, but she started to shake, and I saw a kind of fear in her eyes as her limbs, and even her jaw, began to tremble. When I saw that, I too was afraid. She was looking so alarmed that I wondered if she was going to faint. What a scandal that would have been! Those close to her would have thought that I had not respected this woman whom they all saw as a divinity. That was why I took the handkerchief without a word and quickly left the room. Why did she begin to tremble when I looked at her? From that moment on, I felt that I was no longer a welcome guest… 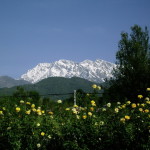 The symbolism of the lingam is identical to that of the Hebrew letter shin . When I was in Kashmir, meditating with the peaks of the Himalayas before me, I had more revelations about this symbol. I also went to Pahlgam and as far as Gulmarg. One day, after I had done some concentration exercises, I went out for a walk in the mountains. And there, what was extraordinary was that I was able to go great distances at that altitude without feeling tired. I felt as if I were flying; my feet hardly touched the ground, and my body felt weightless. I was astonished to be able to walk and climb so quickly and with such lightness! It was the first time that such a thing had happened to me. It was as if I were levitating. 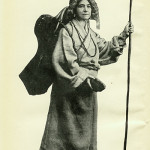 Alexandra David-Neel, who lived in Tibet, writes in her books of similar happenings with Tibetan lamas, who could cover enormous distances and even move over and above rivers and lakes. She herself said that she had once had such an experience. I was lucky enough to meet Alexandra David-Neel in Lyon. She really was a quite extraordinary woman!
To be continued…
Omraam Mikhael Aivanhov –
A living Book, Autobiographical Reflections 1
http://www.prosveta.com/api/flipping/AB0001AN