– These well-known figures in history were ‘Initiates’
I will talk today about the ‘Mysteries’, the ceremonies that took place in the temples of ancient Egypt, and the ordeals that disciples had to endure before being worthy to take their place among the initiates.

You have all heard of the mysteries into which such illustrious figures as Orpheus, Pythagoras, Plato, and Apollonius of Tyana were initiated. For centuries, those who wanted to receive instruction in the highest principles of science, philosophy, and religion went to Egypt.

Even Moses was taught by Egyptian priests. It was in Egypt that he learned the magical skills that enabled him later to work so many miracles to save his people and lead them to the land of Canaan. The different rites and precepts contained in the books of the Pentateuch and the symbols Moses used were inspired by the knowledge he had acquired in Egypt and, later, from Jethro, the high-priest of Midian, who was the father of Zipporah, his wife.

Thus, for as long as the priests were able to maintain the pure tradition of the mysteries in their temples, many of the great initiates of the past received their training in Egypt. And even when the mysteries were no longer celebrated, the tradition continued to influence philosophy and religion.

Although the essence of the priests’ teaching was always kept secret, some aspects of it were spread abroad in symbolic or veiled forms. Herodotus, the Greek historian, who spent some time at Saïs, knew something about the Egyptian initiations, and Manethos, an Egyptian historian, himself a high-priest at Heliopolis, is considered by many scholars to be a precious source of information about them.
The influence of the mysteries can be seen in the work of Plutarch (a high-priest of the temple of Apollo at Delphi, who travelled in Egypt and wrote a treatise on Isis and Osiris) and, later, in that of such thinkers as Clement of Alexandria, Origen, Plotinus, Porphyry, Jamblichus, and Proclus. In The Golden Ass, the Latin writer Apuleius describes certain rites of the cult of Isis. In fact, the whole of the esoteric tradition bears signs of the Egyptian influence. 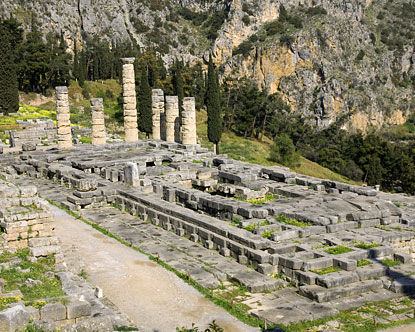 It is important to realize that the teaching dispensed in the temples was not exclusively theoretical. Initiation was a discipline that concerned intellect, heart, will, spirit, soul, and body. The disciples had to show that they were capable of overcoming all the manifestations of their lower nature, their instincts, and their passions. This is why I want to give you some idea of how the ordeals were conducted in the temples.

I was fortunate enough in my youth to come upon some initiatic books and manuscripts which taught me a great deal about these ancient initiations. Also, I was able to recapture many memories of my own remote past. It is possible, therefore, that you could find much of my Teaching in the books of several well-known authors, but the way in which I present it remains my own.

Main image: Pythagoras
To be continued…