– Creation  is the work of the Two. But what is the Two? It is the One polarized as positive and negative, masculine and feminine, active and passive. Manifestation necessarily implies partition, division. In order to manifest and reveal itself, the One has to divide itself. Unity is the privilege of God alone, his own exclusive domain.
But in order to create, God, who never ceases to be One, had to become Two. The One cannot create, for in unity there is no reciprocity. In becoming polarized, therefore, God projected himself outside himself and from these two poles the universe was born. Positive and negative poles are mutually attractive and it is this mechanism of reciprocal action and reaction that originates and sustains the movement of life. 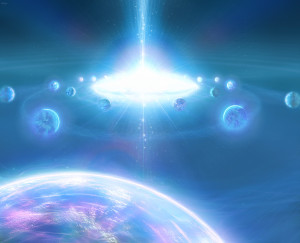 The One is that which is enclosed within itself. In order to emerge from itself it has to become Two. In initiatic science, the Two is not the sum of One plus One, as in mathematics. It is the One, which, in order to create, is polarized as positive and negative. It is important to understand that when we are talking about principles, we attribute no psychological or moral value to the words ‘positive’ and ‘negative’.
We are not saying that ‘positive’ implies something good and constructive or that ‘negative’ denotes something bad and destructive. We have to remember that these terms belong primarily to the vocabulary of the physical sciences which deal with the two great forces of nature, electricity and magnetism.

Both these forces are polarized. Both are positive and negative, emissive and receptive. An electrical connection and a magnet both have two poles. When we borrow these terms from the plane of natural physical forces and apply them to the psychic and spiritual planes, we see their positive, emissive properties as belonging to the masculine principle, and their negative or receptive properties as belonging to the feminine principle.To be continued…

Image: Yin-Yang, the 2 Cosmic  Principles, apparently opposite or contrary, are actually complementary and interdependent in the universe.