– The number Ten represents the axiom ‘Know thyself’.
One penetrates the Zero in order to animate it and set it in motion. This notion is also expressed by the symbol of the dot in the centre of a circle, The wind or spirit of God is the masculine principle which hovers over matter – symbolized by the waters – in order to fertilize it. Water is the circle, the , and the spirit of God is the dot, the One.
Unless it is animated by the spirit, matter remains tohu va-bohu, formless and void. But when it is overshadowed and fashioned by the spirit, all the possibilities it contains begin to be manifested, and it becomes a universe, with suns, constellations and nebulae. Our universe, therefore, represents the Zero, matter which has been fashioned, animated, and organized by the spirit.

Everything we see in the universe is produced by the One and the Zero, by the One which penetrates and animates the Zero. It is a principle of mechanics that a piston must move within the cylinder in order to activate a motor. Without this movement nothing would work. And what is a wheel? A Zero, the circle, which rotates around a central axis, the One. A wheel demonstrates the work of the One within the Zero, the spirit that activates matter. And we find this mirrored in the fact that the earth itself has an axis, and in ceaseless rotation around this axis spins its mass, the Zero. 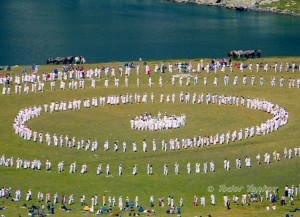 Those who know how to study numbers see them becoming significant, alive, and active. In order to form the number Ten, the One and the Zero must be both linked and mobile.

Every action that contributes to sustaining life corresponds to the number Ten. When you eat, you open your mouth – Zero – and put in some food – One, and the combination of the two produces energy. When you see, it is because light – One – enters the Zero of your eye. In the same way, you hear because a sound strikes your ear. As for your head, its very shape reflects the Zero, and this Zero has to be penetrated by the One.  You will say, ‘What strange interpretations.’ Yes, they are interpretations.

The number Ten is also within each one of us. The One is the mind, the Zero is the heart. By means of our mind we have to penetrate the heart – our own and that of others – in order to illuminate it and work in collaboration with it. The intellect or mind, like the piston which goes in and out of the cylinder, must go in and out of the heart. Those who fail to use their intellect in this way will be incapable of understanding. Above all they will be incapable of knowing themselves. 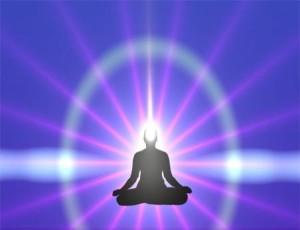 One might say that the number Ten represents the axiom ‘Know thyself’. By penetrating the deep caverns of the heart, wisdom discovers the treasures it contains, the hidden veins of precious stones, metals, and liquids. The intellect descends into the dark well of the heart in order to find and draw out its precious waters. The Ten, therefore, represents the work of the intellect on the heart, but it also represents the work of the spirit on the soul. In its most sublime significance, the Ten represents a human being whose spirit plunges into the depths of the cosmic soul in order to pierce its mysteries, and returns illuminated.

We have to become familiar with the Ten on the highest levels. In every human being there is the feminine aspect, which represents darkness, and the masculine aspect, which bears light. These two aspects are particularly well developed in those who are very creative. A Ten without light is a Ten in a two-dimensional world. In the three-dimensional world the Ten is in action in the midst of light.
To be continued…