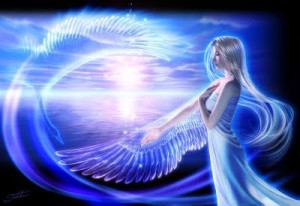 Instead of thrusting itself forward in the manner of the masculine principle, the feminine principle draws things to itself. This is its mode of activity, and anything that is incapable of resisting this attraction is absorbed. The masculine mode of activity is more visible but it is not more powerful. To be active is, as it were, to move from the centre towards the periphery; to be passive is to attract the peripheral elements towards the centre. And even if this attraction is not very visible, it is very real and very effective.

What is the rightful place of the masculine and the feminine? One day men and women are going to have to settle this problem, which is a constant source of conflict. For hundreds and thousands of years, the domination of men has laid a burden on women, and now we are beginning to see a reversal of the situation.
Women have become bolder: they are no longer willing to be subject to men, but want the same rights as men. They are even ready to take the place of men and assume their role. This is only normal; it is the law of compensation. Men have gone too far. Instead of being models of integrity, kindness, and justice, thereby earning the esteem and admiration of women, they have abused their authority and their greater physical strength. They have taken all rights and privileges for themselves and given women nothing but duties.
How could they expect the situation to last for ever? Both parties acquire wisdom and recognize that they are truly equal; not equal in the same spheres, but equal in the importance of their respective functions.

In every area of creation equilibrium exists because the two complementary forces exist. It is absolutely normal for women to want to enjoy the same freedoms as men, it is normal that they should want to show their capacity for initiative, but they can do so without imitating men, taking their place, or trying to do without them. Freedom, audacity, and a spirit of initiative are qualities that women need to cultivate. True, but at the same time they must deepen and strengthen the quintessential qualities of the feminine principle.

Neither men nor women should dominate the other. It is normal for women to want to reclaim the freedom and the rights denied to them by men, but they must try to achieve their goal by intensifying their own innate qualities, not by trying to imitate the behaviour or way of life of men. The equilibrium of life is based on polarization, that is, on the existence of two poles between which, because they are different in nature, there can be reciprocity. If the two poles were uniform, there could be no exchange, none of that magnificent mutuality that is the source of so much joy and inspiration.
To be continued…