Sons and Daughters of God, Part 3/7

The Holy Trinity, Part 2/7
Human beings are inhabited by the divine, Part 4/7
Sons and Daughters of God, Part 3/7

Jesus received the Christ principle in its entirety, but Jesus is not the Christ. The Christ, which is a spirit of light and love, remains a spirit.

Light will long remain an enigma for humans: they can see it, they can feel it, they can experience it inwardly, but they will perhaps never know what it is, unless they succeed, through dint of great spiritual work, to reach its origin on high, in order to unite with it.

That is what Jesus did, and it is in this sense that he can be called the Son of God: because he merged with the Word, which is the first divine emanation. So, just because we use the same words ‘father’ and ‘son’, we should not confuse human realities with cosmic realities. For us, as human beings, a father and son are two beings linked by blood ties, whereas the Father and Son, the first and second persons of the Holy Trinity, belong to a totally different order.

God the Father is the creative principle, and His Son, whom Christians have called the Christ, is His emanation. It is this principle which must descend into each human being through the power of the Holy Spirit, in order that each may become a true son of God, a true daughter of God.

The Christ, who is the second face of God Himself, has never taken a physical body and never will take one. He cannot become man. He simply enters into those souls and spirits who are ready to receive and unite with Him. This is how He entered Buddha, Moses, Zoroaster, Pythagoras and so on. The Christ, which is a spirit of light and love, remains a spirit. And Jesus, like all other initiates, had to travel quite a path before this spirit descended into him. If he was called Jesus Christ, that was not because he was the Christ but because he had received the Christ. You must be really clear about this: the Christ is a divine entity who has nothing to learn on earth, unlike Jesus who had to be instructed. Jesus, the man, could not forego earthly instruction, and for thirty years he prepared himself for his mission.

It is this consciousness that we must develop, until we succeed in merging with the divinity so that we are able to say, one day, like Jesus: ‘I and the Father are one.’ How can anyone think that the identification of a man with the Divinity had never happened before Jesus and will never happen after him? 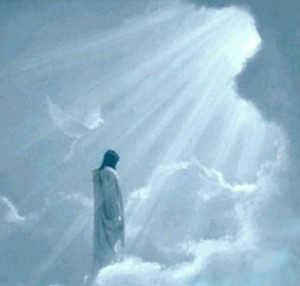 FacebookTwitterLinkedInRedditGoogle+TumblrPinterestVkEmail
The Holy Trinity, Part 2/7
Human beings are inhabited by the divine, Part 4/7