“On the first day of spring each year, in Bulgaria and in most other Slavonic countries, people wear two little red and white pompoms in their buttonholes. Nobody knows exactly where this age-old custom comes from, but the two little pompoms have profound symbolic significance in alchemy. In alchemical texts you will find references to the Red Man and the White Woman, who may also be represented as the sun and the moon, and gold and silver are the corresponding metals. 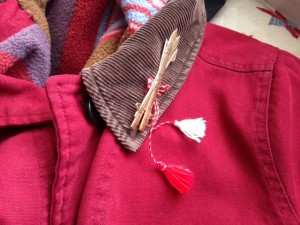 But in their treatises, alchemists were always very secretive about two things: the exact nature of the substance they used in the Great Work and the degree of heat reached in the course of the Work. The Work properly speaking started only when these two elements began to be cooked together at some unspecified temperature. The precise moment at which the Great Work should be undertaken was determined in accordance with astrological phenomena: just as the sun entered Aries, that is to say in the first few days of spring, and with the moon in Taurus. This is the most auspicious moment to start, because the sun is exalted in Aries and the moon in Taurus. The sun symbolizes the active, masculine principle whereas the moon represents the passive, feminine principle.

In alchemy, red symbolizes man and white, woman. So the two little red and white balls are symbols of the two principles perpetually at work in Nature. Alchemical Work begun in the first days of spring produces two powders, one red and one white. The red powder has the power to transmute base metals into gold and the white powder transmutes base metals into silver.

But these two little red and white balls are to be found in Nature, also. First of all in the red and white corpuscles of the blood and also, with a slightly different nuance in the colour, in the yolk and white of an egg. So you see, if you wear the red and white balls in your buttonhole you, too, will be alchemists, but unconscious alchemists, because you still do not know how to transform the base metals within you into gold and silver. This can only be done by love and wisdom. The transmutation of metals into gold and silver is an alchemical process which must be made to happen in the three worlds and not only in the physical dimension. If you want your thoughts to be turned to silver, you have to use light and wisdom and, if you want your feelings to turn to gold, you have to use the warmth of love.

The moment when the sun enters Aries is of primary importance for alchemists, for it is then that the sun – the masculine principle – acts most powerfully on the earth – the feminine principle. The earth receives and absorbs the sun’s rays and begins to produce leaves, flowers and fruit. Spring is the Philosophers’ Stone, the Life which renews and rejuvenates the whole of Nature. The fire of the sun acts on the First Matter, the earth, to give it life. This is the alchemical symbolism of spring. In winter the earth is cold and barren, but once its substance has been ‘cooked’ for a while by the heat of the sun’s rays, all its hidden treasures begin to come to the surface.

The alchemists observed what took place on the earth and understood how Nature worked to transform and transfigure everything: that which is dead, black and shrivelled, comes alive and displays its colourful beauty. To be continued…