The Sun, Sunlight and Intelligence, Part 5/7

Our Higher Self dwells in the Sun, Part 4/7
The Sun as a Model, Part 6/7
The Sun, Sunlight and Intelligence, Part 5/7

– Model yourselves on the sun
The sun does not have to move from where it is to touch us. It touches us with its rays. The sun is not confined to what you can see of it. Its radiance extends to the outer limits of the universe, travelling distances that astronomers measure in billions of light years. No one knows the exact nature of the sun’s rays yet, nor the power that propels them to such distances, still less does anyone know what they contain.

But I can tell you that they are loving glances that the sun sends us, that they are tiny wagons overflowing with every kind of nutritious fare, which they bestow on us before hurrying back to be refilled and return, again and again, loaded with thousands of gifts. The nutritious elements from the sun are bestowed not only on plants, trees, insects and animals, but also on rocks, on the earth, and on metals. The whole of creation receives sustenance from the rays of the sun which fall on the earth, the ocean, the atmosphere, outer space and the other planets, and on all the creatures who inhabit them.

This is why my advice to you is to ignore everything else, to study only the sun’s rays, for in doing this you will be illuminated, warmed and strengthened. If you only knew what power, wealth, clarity, purity, and intelligence were contained in one little ray of sunlight. 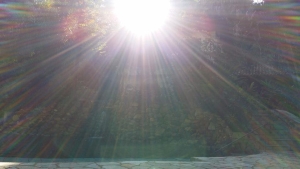 Yes, there is intelligence in a ray of sunlight. Does that surprise you? No one on earth is as intelligent as a ray of sunlight; no one, not even the greatest genius. This is why you should take them seriously; if you yearn for them, seek them out, love them, and open yourselves to them, you will come to understand the meaning of creation, and your own life will become creative, meaningful, and splendid. You will experience absolute fulfilment.

The work that transcends and surpasses all others is that of penetrating the hearts and minds of men in order to enlighten, warm, and uplift them. So, as I never cease telling you, if you want to understand everything you must model yourselves on the sun.

FacebookTwitterLinkedInRedditGoogle+TumblrPinterestVkEmail
Our Higher Self dwells in the Sun, Part 4/7
The Sun as a Model, Part 6/7