The Zodiac and the stages of creation – Part 2/7

The space that lies within the Zodiac Belt symbolizes the space set aside by God in which to create the world. Initiatic Science tells us that the order in which the twelve signs of the Zodiac are placed (Aries , Taurus , Gemini , Cancer, Leo, Virgo, Libra, Scorpio, Sagittarius, Capricorn, Aquarius, and Pisces reveals the sequence of the different stages of creation.

Part 2 of a series of extracts from the Master’s lectures, on the subject of the Zodiac introducing the 12 astrological signs

Aries is the first sign in the Zodiac; the sign that sets everything in motion. Aries is the indomitable, irrepressible force bursting out like leaf-buds in spring. To this raw, untamed force, Taurus adds its contribution of matter, but matter which is as yet formless, an inchoate mass of undifferentiated elements. A building site covered with untidy heaps of the raw materials needed to build a house, is a good image of the stage in which Taurus is dominant.

But all these elements have to be used to make something, so after Taurus it is time for Gemini to start organizing all the disparate elements by establishing a network of communications: ladders, wheelbarrows, pullies and cranes, to move the materials into place ready for the building to begin. With Cancer, the time has come to lay the foundations: a solid base of ‘reinforced concrete’. In nature this base is the central germ or core around which all the different elements converge and cohere.

Leo then brings his influence to bear by introducing centrifugal force into the combined elements, and with the intervention of Leo comes a rise in temperature and more intense activity which culminates in an explosion, and the whole mass begins to glow and irradiate in space. When Virgo comes onto the scene she declares that it is time to order and organize all this, and she sets to work to put everything into its rightful place.

But order is not enough: the aesthetic element of beauty and harmony is needed, and it is Libra who introduces this element. With Libra we have reached the seventh day (the seventh sign), and work pauses for a while, allowing the workers a period of rest and refreshment. It is at this stage, in the prevailing holiday atmosphere, that some of the workers give way to sloth and indolence and the first signs of disintegration begin to make their appearance.

Scorpio comes onto the scene, upsetting the existing balance and introducing a climate of hostility, but he is followed immediately by Sagittarius with his gift for reconciling individuals with each other and with the heavens. Sagittarius channels all these seething energies and directs them upwards to the service of a higher order of activity (this is the symbolism of the bow and arrow held by the Centaur).

Once the world is properly organized and all its parts functioning smoothly, there is a tendency for things to crystalize and harden under the influence of Capricorn: life falters and begins to seep away. At this point it is the turn of Aquarius to set in motion the dynamic forces of the spirit, thus saving everything from destruction by ‘over-materialization’.

The world knows peace, at last, with the coming of Pisces, and in this climate of peace and universal harmony, life becomes ever purer and more subtle until all things melt and flow back into the primeval Ocean.

This image shows the constellations for each sign in the Zodiac Belt: 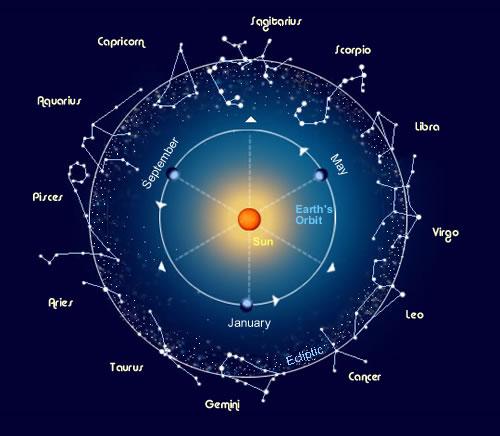