« Initiatic Science teaches that we live out our lives immersed in the ocean of fluidic matter known as astral light. This fluid is so sensitive that it bears the record of everything that occurs in the universe: the most insignificant gesture, the slightest, most superficial emotion, every fleeting thought that goes through our minds: it is all recorded. According to esoteric tradition, astral light is an extremely subtle substance emanated by all creatures, from human beings, animals and plants, to the rocks of the earth and even the stars in the heavens. »

This is Part 1 of a series of extracts from the Master’s lectures, on the subject of the Zodiac.

« It is this fluidic matter that Hermes Trismegistus referred to as Telesma, saying, ‘The father thereof is the Sun, the mother the Moon. The wind carried it in its womb, the Earth is the nurse thereof’. Of course we should not think that the Sun (fire), Moon (water), Wind (air) and Earth of which Hermes speaks are no more than the four material elements familiar to us all: he is speaking of the fundamental cosmic principles out of which all matter was created. The Hindu name for this fluidic matter is Akasha; others know it as Cosmic Electricity, the Primeval Serpent or Fohat.

But it doesn’t really matter what we call it and it is totally impossible to define or name all the different forms it has taken since the beginning of the world, for every creature, capable of thought, feeling and movement, that exists or has ever existed, is constantly impressing new vibrations on it. Its exact nature is extremely mysterious, and whatever is said of it will always be both true and false. But this we can say with certainty: it is capable of recording absolutely everything that happens in the universe. And the proof that everything is recorded can be seen in the fact that clairvoyants can read from an object events that have occurred in its vicinity; they can even read in it the destiny of someone who has held that object in his hands for only a minute or two.

Of course, I’m speaking of authentic clairvoyants; the very existence of clairvoyance such as this is a powerful argument: if the scientists who put all their faith in materialism took it seriously they would be obliged to modify their understanding of the nature of matter.

The space that lies within the Zodiac Belt symbolizes the space set aside by God in which to create the world. Initiatic Science tells us that the order in which the twelve signs of the Zodiac are placed (Aries, Taurus, Gemini, Cancer, Leo, Virgo, Libra, Scorpio, Sagittarius, Capricorn, Aquarius, and Pisces), reveals the sequence of the different stages of creation. »

This image of the Zodiac Belt shows the twelve signs and their symbols which will be referenced later in this series. 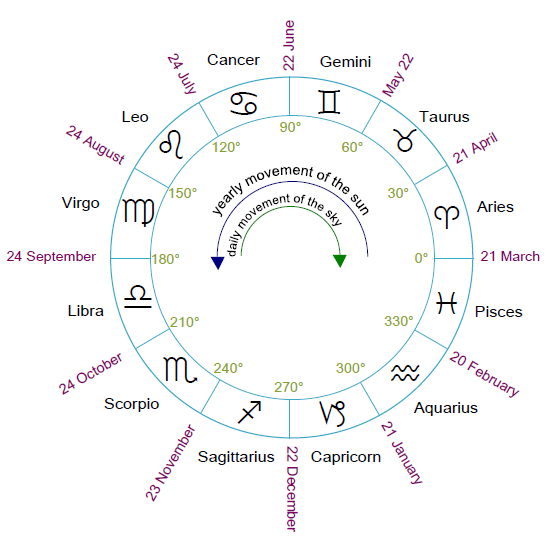