The Three Great Laws of Magic – The Law of Affinity, Post 6/7

By our vibrations we attract higher beings from the invisible world who will come and help us-
Those who have studied the relationship that exists between human beings and the cosmos have discovered that there is an absolute correspondence between them. Each vibration has a tendency to seek out and unite itself to another vibration of the same frequency, and this means that all creatures, by means of their own particular vibrations and wavelengths, establish contact with other beings, entities and forces with the same wavelengths and the same frequency of vibrations, wherever they may be in the universe.

Tuning forks provide a real life example
Suppose that we have a table, here, on which we place several tuning forks, only two of which are the same length. If we start them vibrating, one after the other, each one will give a different sound, until we come to the two identical ones; then, as soon as we make one of them vibrate, its twin will respond, without being touched, and produce the same note. 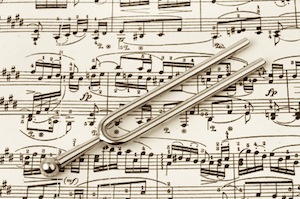 You are all familiar with this phenomenon, but none of you know how important the law that lies behind it is for us. Yes, for exactly the same phenomenon occurs between human beings and everything that exists in the universe. If you try to have only luminous, disinterested thoughts and pure, generous sentiments, thanks to the law of affinity you will attract kindred entities and elements from space, and in this way, you will receive more and more help and support.

Good thoughts, feelings and deeds – vibrate on the same frequency as higher beings
Why not go and ask for help from those who could give it to you? They are there, everywhere, very close to you; if they are not actually helping you yet, it is because you don’t know how to ask them. If you want them to hear you, you must try to have at least one good thought, one good feeling, do at least one disinterested deed. When you do this, you begin to vibrate on the same frequency as these higher beings, and sensing this, they will be obliged to come and help you.

Through the Law of Affinity you attract elements, beings and forces from space
Your own thoughts, feelings and actions determine exactly what kind of elements, forces and beings will be aroused, and eventually, attracted to you from space. This is the law of affinity; it is one of the greatest laws of magic and you must rule your lives by it. Each day, when you feel that certain thoughts and feelings are trying to slip in, say to yourselves, ‘This thought or feeling necessarily has an affinity with elements of a certain kind in space. If I associate with them, shall I be attracting something good or something bad?’

Those who attracted superior elements during their previous incarnations are now beautiful, intelligent, capable beings who are loved and admired by all. So you see how important it is to know the law of affinity and to set to work immediately to draw from the ocean of space particles so bright and luminous that every aspect of your inner being may begin to improve.