Angels and the Mysteries of the Sephirotic Tree

The Chakras and the Secret Science of Kundalini
A Rose – a gift from Venus, Part 1/2
Angels and the Mysteries of the Sephirotic Tree

– The Sephirotic Tree, veritable synthesis of the universe
Judaic/Cabbalistic tradition teaches that there are nine orders of angels: Angels, Archangels, Principalities, Virtues, Powers, Dominations, Thrones, Cherubim, and Seraphim. Each angelic order represents one aspect of the powers and virtues of God.

If you want to come closer to the Creator, you also need the profound understanding of the universe which only a systematic explanation can give you.  The Sephirotic Tree is a veritable synthesis of the universe. For me, it is the key that enables us to unlock the mysteries of creation. 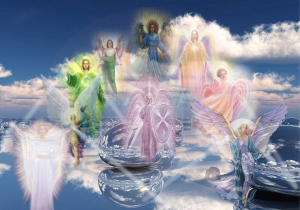 The twenty-two paths and ten sephiroth add up to what is known as the thirty-two ‘paths of the Sephirotic Tree. It is by means of such spiritual ‘mastication’ that we acquire wisdom. To become wise is to chew the experiences we encounter each day so as to extract the nutrients they contain.

The thirty-two paths of wisdom link the ten sephiroth, each of which has five divisions. Thus the Cabbalah speaks of the fifty gates of intelligence or understanding, and these gates are attributed symbolically to the sephirah Binah. But in order to open a gate we need a key, and according to initiatic science the true key is self- knowledge. Initiates can know everything because they know themselves.

The Sephirotic Tree is designed to teach neither astronomy nor cosmology. The truth is that no one can say exactly what the universe is or how it was created. The Sephirotic Tree represents a systematic world-view that is mystical in nature, and whose origins can be traced back thousands of years. 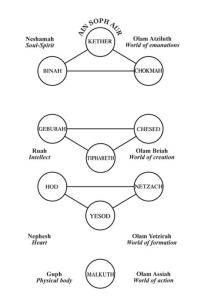 The teaching of the Cabbalah sees the universe as an integrated whole, of which the Sephirotic Tree is the perfect expression. Within that whole, however, several different regions can be distinguished.
A first division distinguishes four planes:
– The higher plane is Olam Atziluth, the world of emanations, and it comprises Kether, Chokmah and Binah.
– Below this is Olam Briah, the world of creation, comprising Chesed, Geburah, and Tiphareth.
– Below this again is Olam Yetzirah, the world of formation, comprising Netzach, Hod, and Yesod.
– Finally, there is Olam Assiah, the world of action, formed by Malkuth alone.

Another way of dividing the Sephirotic Tree is based on the three pillars. This division expresses the notion that the universe is governed by the two opposing principles of masculine and feminine, attraction and repulsion, love and hate, mercy and severity, and that in order to be reconciled and work together in harmony, they have to meet in the centre.

In the Sephirotic Tree, too, you will find an extraordinary variety of ‘foods’, for it is a reflection of the whole universe. In it you will, of course, find religion and philosophy as well as genuine ethics; but it also contains the sciences and the arts. It is up to you to learn to find your nourishment in it every day.
Omraam Mikhael Aivanhov

Another article on this topic…
Izvor book 236, Angels and the Mysteries of the Tree of Life

FacebookTwitterLinkedInRedditGoogle+TumblrPinterestVkEmail
The Chakras and the Secret Science of Kundalini
A Rose – a gift from Venus, Part 1/2