The Chakras and the Secret Science of Kundalini

– Do angels really have wings?
Where does the tradition of attributing wings to angels come from? If you see a painting or sculpture of a winged being you don’t need to be told to know that it represents an angel. But why do we give them wings and what do the wings mean? Do angels really have wings? No, of course not, but the tradition stems from a very ancient science of man and his subtle centres.
The great initiates of old knew that human beings have two very powerful centres in the back, at shoulder-level. These centres are situated in the etheric and astral bodies and, when they are correctly developed, they create a kind of whirlwind which gives the person the freedom to move through space at will.

On the other hand, the tradition of ancient Greece represented the god Hermes with wings, but his wings were on his heels. This is because there is another powerful centre in the heel which is also related to the ability to move through space. 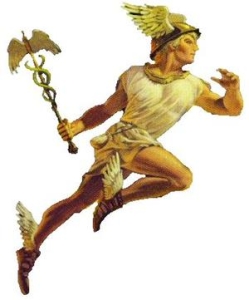 As a matter of fact, we have a great many of these subtle centres in our bodies. When you are contemplating the rising sun, for instance, you absorb sunlight through a centre which lies just over the spleen. The sun sends us energy in the form of minute luminous spheres and the spleen chakra absorbs the white light of the sun and breaks it up into the seven colours of the prism, before sending the different colours to the different parts of the body.

In the Brotherhood we have a marvellous collection of mystical songs composed by the Master Peter Deunov. If you sing them in the awareness that you are performing a sacred act, some of these songs are capable of awakening in your spinal column a living force which passes up the spine and escapes through the Crown chakra. Sometimes when you are singing you may feel a thrill flashing up from your feet to your head, a thrill of absolute purity and light: for a brief moment your whole body vibrates in harmony with the universe. Perhaps you have not yet known this blessed experience, or only for a fleeting moment. When you do experience it in all its fullness you will understand the powers and possibilities hidden in song for the development of the spiritual life.

The age-old custom of burning incense or other sweet-smelling substances in churches and temples goes back thousands of years. The smoke spiralling up from a perfume burner symbolizes Kundalini force as it spirals up through the chakras. The perfume burner containing the glowing coal represents the chakra Muladhara while the smoke represents the fiery serpent, Kundalini. The symbolism of the perfume burner points to the necessity of feeding the fire with fuel so that the Kundalini force can begin to rise.

In spite of having lost the knowledge of its original significance, Christianity has always maintained this tradition of burning incense in church, thereby preserving a rite inherited from the far-distant past. The secret science of Kundalini can also be found in different forms in several other spiritual traditions. 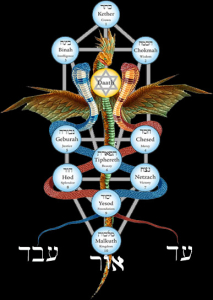 In the Cabbalistic tradition, too, we find this science in the Sephirotic Tree with the central Pillar of Equilibrium flanked on either side by the Pillar of Severity (which is masculine or positive) and the Pillar of Mercy (which is feminine or negative). Two currents flow from the Sephirah Kether, one through Chokmah and the other through Binah, they cross over in Daath, pass through Chesed and Geburah, cross back again in Tiphareth, pass through Netzach and Hod and cross once more in Yesod which symbolizes the genital organs. 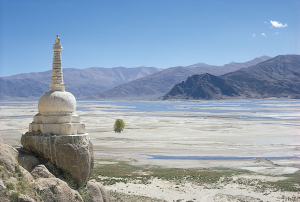 If you go to Tibet you will see that Tibetan architects have concealed this science of Kundalini and the chakras in the form they give to the sacred structures called stupas. Wherever you go, in the courtyards of shrines and monasteries and along the roads, you will see these structures which are all on the same pattern: a base in the form of a cube; on this cube is a spherical form surmounted by a cone. On top of the cone is a concave form like a bowl or crescent moon, and finally, surmounting the bowl, is a form resembling a flame, a raised thumb or the Hebrew letter Yod… »