This is PART 3 – Final of the PURANAS (Sanskrit: पुराण),Lectures – a continuation of yesterday’s lecture covering the Master’s huge contribution to humanity (from my personal notes) and the future of humanity:

…”This is unheard of … I had my doubts about myself in the past despite many predictions, even Rudolph Steiner who said: ‘After me will come one who will be under the sign of enthusiasm and he will speak more clearly than me… and this time will be called the Mikhaelic age…’

There is something so extraordinary in these 4 books… Many Hindus have worked to transcribe this, from the Sanskrit.

ANGIRAS Rishi was created through the power of the Lord when Brahma concentrated on the Word and uttered it… Brahma and Vishnu gave Angiras the power of the three worlds so that he could create, control and maintain in the three worlds. Through this knowledge and power, Angiras was sent to Markhande for Initiation. Markhande (Melchizedek) initiated Angiras and said: ‘For you Angiras, to continue your work, I will always be with you, so that you are all powerful, always.’ and so on…

And even Madrasi Baba, when he attended the conference I gave in this room, along with many other Hindus, told me: “No one has ever explained these such difficult things as clearly. Even with the Gurus, it is never clear, people do not understand anything!” He said these words to me in front of many people. Especially when I explained the symbol of the lingam. This has never been explained, even in the Hindu books, the way I have explained to you. Even Hindus found this extremely clear!

It is said, He who comes in the fourth incarnation, “OMRAAM”,  will bring the knowledge of the UPANISHADS, of the VEDAS, of the PURANAS, but presented in a different way!” That’s what I do, and so everything I revealed to the French, is the quintessence of the oldest and most profound books…

And you have not realized the depth, the importance, the effectiveness of these great truths that I have been revealing to you over the last 45 years! You do not realize, but one day, you will regret having neglected some things, to have been… not blind, but careless. One day you’ll regret it, I know it! Especially those who have left us! Sooner or later everyone will understand, and the whole Earth will accept our teaching…

If this is true… what is written in the Puranas, do you realize the immensity of all this? It is beyond anything you can imagine! I feel overcome. Among the four billion people on earth, many have much higher status and power than me. How come all this falls on me? I am astounded, completely astounded…  Although Peter Deunov said almost the same thing, as well as Nityandanda Maharaji and Vanga, almost the same! And there it was written in the Puranas, that I had the sign of Brahma Rishi on my forehead… Babaji was clairvoyant, because before reading these books, he told me certain things, all of them true.

How did he decipher the signs that I had never noticed? On my forehead, there was the sign – the sign of the highest Brahma Rishi! And he said this before reading it in the books, and the other things that I brought: the SOLAR CIVILISATION, and that the world will see the Golden Age!

I apologise for talking about myself like this, it is the first time, but I hope that it will increase your confidence, your faith, and your commitment to the teaching; and that you will have an enormous impact!  After these few words, it is time for us to unite, for us to join forces to form a powerful family with the laser.  And it is going to spread, to pervade throughout the world. And the more numerous we are, the easier it will be to create the Golden Age. There is nothing else! 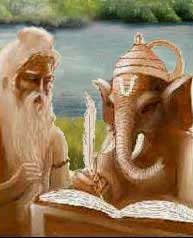 And the third – VYASA! It was he who wrote the Vedas, the Upanishads, and even Tantra Yoga. There are 5 volumes of Tantra Yoga, 18 Puranas, and 4 Vedas.

One day, I said: ‘My dear brothers and sisters, do you know that I wrote books in India, and that the whole world learns from these precious books?’ I said it without knowing that it was true.

No, no, no, you cannot imagine, I am stunned. If you were in my place, you would be crushed! And if this is true, nobody can change anything. It is written, it is written, it is predestined! And if one day it happens, the world will be amazed, especially you, because the elders, will they accept it? 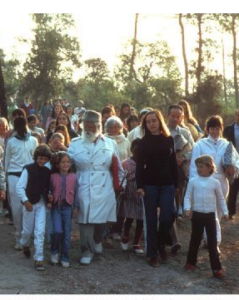 But the new generation will accept it immediately, saying: ‘Why not?’ But the elders, how to convince them? it is difficult to convince them. Even if you do not believe me now, you will be forced to in the future! Because when they come to help me one day, these very powerful friends… and your children… Among these children, there are already some friends of mine when I was Angiras! Because these children will make the whole earth tremble!”