The Sage narrating the Puranas to Lord Ganesha

THE PURANAS (Sanskrit: पुराण),
We would like to share with you on the subject of the Ancient Rishi Tradition in India. These are personal notes on the lectures given by the Master on his return from India in April 1982. In these lectures (over a period of 3 days), the Master decided he would reveal some truths about himself and his links to the Rishi Tradition, revealed to him by Indian Masters and Clairvoyants. We hope you will get a sense of the Master’s huge contribution to humanity.

To our knowledge, these conferences have never been shared before, in French or in English:

“Many things that were said in the past, even in the Bible, even in the sacred books of India, were relevant at the time. But I have made a decision to show, that because so much has changed, they are not as useful as they once were, they are not as effective. So we need to find other methods. What I will reveal to you today, at first I wanted to keep to myself, but it will help you so much, so much, so much, even if you do not believe me…

When we arrived in India in 1981, we stayed several days in New Delhi, with friends – and in the Himalayas as well. And this is what is now happening: they want to build me a house to live in the Himalayas – we were at 3,000m – and they also want to buy some land and build an ashram in southern India, where it is hot all year around, much hotter than here, even during winter. And they want to do something there – spread the teaching of the Great Universal White Brotherhood, and they say that millions of Hindus will go there to study! 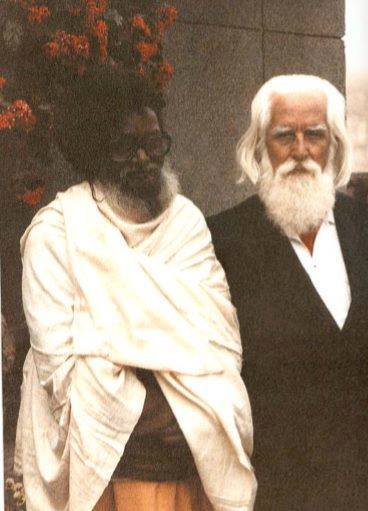 The Master with Madrasi Baba

…After a few days there, a Guru called Babaji (Madrasi Baba) came to see me. He has an ashram, he is a clairvoyant, a healer – he has great healing secrets. When he was shown my photo, he said: “Oh I saw him 15 years ago coming out of the sun, he is a Solar Rishi, he comes from the sun. I will go and meet him!” I felt such a love for him, too! He told me: “Well, I saw you 15 years ago, you showed me a gospel and you told me some truths. You were exactly as you are now. And then I saw you again five years ago, and you spoke to me again.” He told me he had never ever met anyone like me in India.

He said: “You surpass them all, there is no one like you! And on your forehead, I see the symbol of Vishnu and Shiva.” He discovered that I was a Brahma Rishi, which means the highest degree of initiation of holiness, perfection – the highest degree.  It is a title that is not just given to anyone: Brahma Rishi, and after this he told me other things about myself: that the world will one day be led by our Teaching, that the Teaching that I was bringing was the most important, the most illuminating, the most powerful! He also talked about who I was in the past… and that was it.

And then something urged him to go to the library to get some books, among the oldest: the PURANAS. They are older than the VEDAS and the UPANISHADS. They are a few thousand years old. In one of these books, he discovered that they talked about me – extraordinary things, clearly written, and it was all about me. So I needed to go to India to discover these most incredible things about myself! 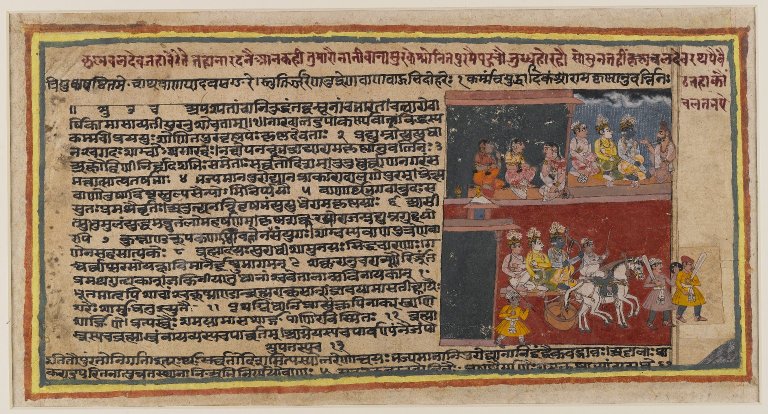 In these Puranas, it was written that Brahma, Vishnu and Shiva met with each other to save the world – for this was a terrible time where mankind was declining, and could even destroy its essence, that is to say, its core.

So, with His Word, Brahma created a man called ANGIRAS, and gave him all the powers, all the knowledge, all the depth, all the wisdom, and he, Angiras, created the seven Rishis.

The seven Rishis, it was he who created them. And he created some more: three wise men, and after that six disciples, and then another 16, and all the names were given. Angiras with his powers, his knowledge, brought the Golden Age, he brought the Solar Culture. ”
To be continued…