– Every human being has a twin soul, a spirit which is their twin. When humans sprang like a spark from the heart of their Creator, they were two in one, that is, two parts that complemented each other perfectly, each one being the other half of the whole. Yes, humans were originally both male and female, androgynous beings, with both the negative and the positive poles within themselves.
During the course of their evolution, humans lost this perfect unity, the two parts divided and separated; this separation of the sexes meant that each one sought their own evolution. If they still recognize each other from time to time during their evolutions it is because each one bears the image of the other within the depths of their being, each one is marked by the seal of the other.

Everyone has the image of their other half inside them, maybe only a vague image, but nonetheless there. And each soul that comes on earth hopes to meet the complementary soul who will give them what they need: perfect harmony, perfect union. Kindred souls bring a form of plenitude to each other which no one else can bring.
All the people you met in all your incarnations, all the husbands and wives, lovers and mistresses who left you or whom you left, did so because they were not meant for you, you did not really belong to each other. You may have been together momentarily, but, like a square lid on a round pot, you did not fit. Two souls that have been created by God as one can never be separated by anyone, nothing can keep them apart when they are made for each other. They recognize each other with absolute certainty and, once they have found each other, they cannot be separated. 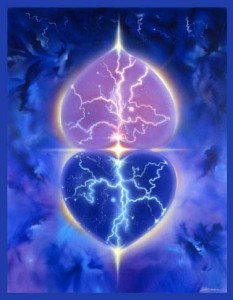 A human being meets their twin soul twelve times during their entire earthly existence including all their incarnations, and more often than not this meeting is fatal to them both, for there is no place in human lives for perfect love, the right conditions do not exist.

Philosophically speaking, we could say that our twin soul is our higher self, our opposite pole. If we are here on the earth below, the other pole must be above, where God and his Angels are, in heaven in all its perfection and plenitude. That is what disciples were taught in the mysteries of initiation: how to become one with the other pole. In India, what is called Jnani-Yoga teaches a method thanks to which the yogi unites with his higher self… and eventually, with God himself. The same idea can be found in Greece, inscribed on the facade of the Delphic Temple: Know Thyself.

We all seek our kindred soul or spirit, but, as Initiatic Science tells us, you cannot find on the outside what you have not already found inside, you will pass it by without noticing. The more beauty you possess inwardly, the more beauty you will perceive on the physical plane. If you are not sufficiently developed, if you have no beauty inside, then you will not see it around you nor even recognize its existence. If youhave inner beauty, you will see it everywhere, because the outer world is a reflection of the inner world.
To be continued…