Harmony – an attitude of contentment, Final Part 7/7
Love is its own reward
Mothers can work great miracles

‘A child’s nature and character are determined before they are born’
‘At the present time most women are completely unaware of the influence they have on the child before birth. They have no idea that their thoughts and feelings affect the baby they are carrying, they think they can lead any kind of life they please independently of the life within them, which they think of as independent from them. They are wrong! The psychic life of the mother has as much effect on the child as her physical life.

Women should want to do everything possible to have a beneficial effect on their unborn child. The child spends nine months in its mother’s womb, and during that time it is formed in body and mind. Mothers who keep a diary during their pregnancy will see that the child manifests at different times in their life the different conditions of their pregnancy.

But in reality, this repetition operates in reverse. What the mother experienced during the ninth month will show up in the child during the first part of his life, and so on. Taking ninety years as the average lifespan, each month of pregnancy corresponds to ten years of the child’s life. I often advise mothers of big families to go back over the events and conditions they experienced during pregnancy in order to understand the traits of character and even certain health problems of their children. 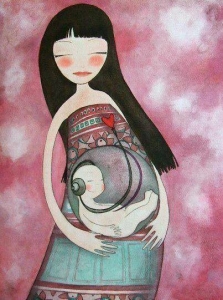 When I say that you should educate a child even before its understanding is wakened, I mean long before… even before its birth. It is when a child is still in the womb that education should begin. And it is up to the mother, especially, to talk to her child, and tell it about  all the qualities she wants for it, all the magnificent things she wants it to do later.

A mother who expects a child should say to herself, “I have a marvellous opportunity during the next nine months to fill my baby with all the pure elements that will make him beautiful, intelligent, sound in mind and body, a blessing to all mankind… by the way I live, think, and feel. If I watch over myself as I watch over him, making sure to bring him only the best thoughts, feelings and actions during this time, I will be contributing elements of pure gold that will make him wonderful!” Once the child is born it is too late, it has already escaped her influence, she can do no more for him. A child’s nature and character are determined before it is born and nothing its parents do after that, nothing doctors or nurses, teachers or psychologists do, will be able to change it…

If millions of parents all over the world decided to have this attitude during conception, if mothers everywhere recognized the fact that they are responsible for shaping their child’s character, mind and body, through their own thoughts and behaviour during gestation, then it would take only three or four generations for mankind to be completely transformed!’

FacebookTwitterLinkedInRedditGoogle+TumblrPinterestVkEmail
Harmony – an attitude of contentment, Final Part 7/7
Love is its own reward