– God is more than Good
Good is sustained by evil, and without realizing it, good, in turn, often sustains evil. Good and evil are both yoked to the wheel of life, and both help to keep it turning. Evil does not exist in itself. Evil is a good that is not understood. Even the best of things become bad if they are misunderstood. On the other hand, those who understand hell and the devil can make them serve the purposes of good

Nothing would work well on earth if only good people existed. Everything can be useful, therefore, but one has to know how to combine things correctly. Those who fail to understand this spend their time struggling against what they call evil. They do not realize that for every manifestation of evil there is a corresponding reinforcement of good, and that if they succeeded in eliminating evil, they would, at the same time, eliminate the good.

Evil lies only in the lack of light, intelligence and strength which causes us to become its prey. Evil is a servant of God. It has its role to play in this world, and it is important that we understand it. Satan obeys God, for he does only what God allows him to do. It is impossible to resolve the problem of good and evil on the physical plane, for that which unites these two contradictory forces belongs to a higher plane. We shall never be able to understand them if we look at them from our own level: all we can see from below is that they oppose each other.
Our task is to raise ourselves to the level of this higher authority, our higher Self, which is capable of using both in pursuit of a purpose that neither one knows or understands. Good does not know everything. Neither, of course, does evil. The one who knows everything is above both good and evil: the Lord. 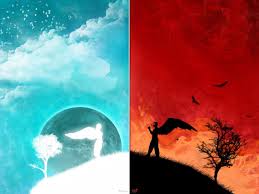 The fact that we have some slight knowledge of good leads us to think that we know God, but God is more than good. I repeat, God is far above both good and evil. Just as mental energy and sexual energy are the polarization of the same energy, so good and evil are the polarization of one force. You will perhaps be taken aback by this idea. Is it really possible that mental and sexual energy are two facets of the same energy? Is it possible that the force that causes a brute to attack and rape a woman is identical to that which inspires the most sublime creations of the mind?
I sense that it is extremely difficult to make myself understood when I explain these things, for my explanations turn the generally accepted notions of good and evil upside down. It is as though these old notions were built into the human body. It is impossible to uproot them. But as long as people do not change their point of view they will never be able to enter the temple of the Lord.

And how do we usually picture the front of a temple? As two columns surmounted by a pediment which is the link between the column on the right and that on the left. Symbolically, the pediment is the third force that works with the other two forces. In the same way, our existence is placed between two pillars, and although each exists in its own right, these two pillars must not be separated; they must be ruled by a third principle which is their common link. The pediment of the temple is, as it were, the equivalent of Kether and the central pillar of the Sephirotic Tree. And we find the same symbolism in the wand of the Caduceus of Hermes. The appearance is different, but the central wand plays the same role.

Evil consists in attempting to separate the two poles. But we can equally say that it consists in trying to join them. It is just as bad to bring them too close together as it is to try and separate them. There must always be a certain distance between them.
To be continued…