The Brain and the Solar Plexus, Part 9/10

The human brain is still not fully organized, but this will come, for its mission is to record the totality of knowledge and to give birth to notions still beyond our ken. But, I repeat, the one in charge at the moment, the one that controls and commands all the others, is the solar plexus in conjunction with the Hara centre, situated a little lower down. What is the relationship between the solar plexus and the brain? They are the two poles: the one masculine and emissive and the other, feminine and receptive.

The solar plexus and the brain are so intimately connected that either can help or hinder the other. God has not given powers and possibilities to only one of them, just as, in the case of men and women, God has not given all power to man and none to woman. No, he has given powers to both, but so different that they can only be made fully manifest when the two principles are united and work together towards a single goal. And in this question of the two ‘brains,’ the solar plexus and the brain in the head, it is important to understand how they are polarized as masculine and feminine, how they interact and influence each other, and the power they have over matter. 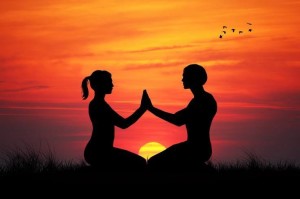 The solar plexus has archives in which all the knowledge it has ever acquired since the most remote past is stored, and it is up to the brain to retrieve this knowledge and express it. If you feel that communications are not getting through as it should, you can massage your neck in the region of the cervical vertebrae, and this will get the currents flowing again between the solar plexus and the brain. The neck is an extremely important passageway;

When you have learned to concentrate on the solar plexus with a deeply loving attitude you will be able to tap its immense resources of energy and direct them to the brain. I have already spoken to you, a long time ago, about the ‘dark sun’ from which our own sun receives its energy. This dark sun, which never stops giving, is the masculine principle, and our sun represents the feminine principle in relation to it, for it receives from it the energy which enables it to shine. The dark sun is a reality, and without it there would be no sun to shine in the heavens.

Let me give you yet another example: that of a tree. A tree consists of roots, a trunk and branches. The roots supply the energy that makes it possible for leaves, flowers and fruit to appear on the branches. The roots are hidden, invisible, but if you get rid of them, the visible parts of the tree will wither and die.

In man the solar plexus represents the roots, and his trunk and limbs represent the trunk and branches of the tree. Man is like a tree, with roots, a trunk, branches, and in the brain, flowers and fruit. The solar plexus is the most important part of man because it is the root; the root is always the most important: if anything goes wrong with the roots, the whole plant deteriorates. That which is visible is always the consequence of something that is invisible, buried deep under the surface.
To be continued…