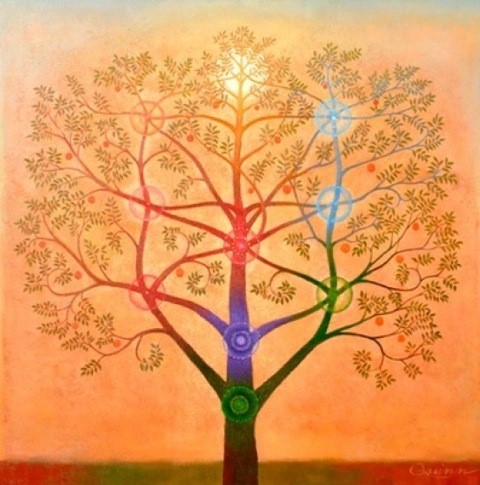 The Structure of the Universe

For those who feel the need to approach the Creator, to try to penetrate his immensity, religion provides a number of means among which are prayer, the attendance at religious ceremonies, and obedience to certain rules.

These means are good but they are insufficient. If you want to come closer to God, it is not enough to experience mystical emotions and abide by certain rules: you also need the profound understanding of the universe which only a systematic explanation can give you.

The Sephirotic Tree provides a key that enables us to unlock the mysteries of creation
It was in the Jewish tradition of the Cabbalah, in what is known as the Sephirotic Tree, or Tree of Life, that I found what seemed to me to be the best and most complete system, for it is the farthest-reaching and the most exact.

The Sephirotic Tree is a veritable synthesis of the universe. For me, it is the key that enables us to unlock the mysteries of creation. 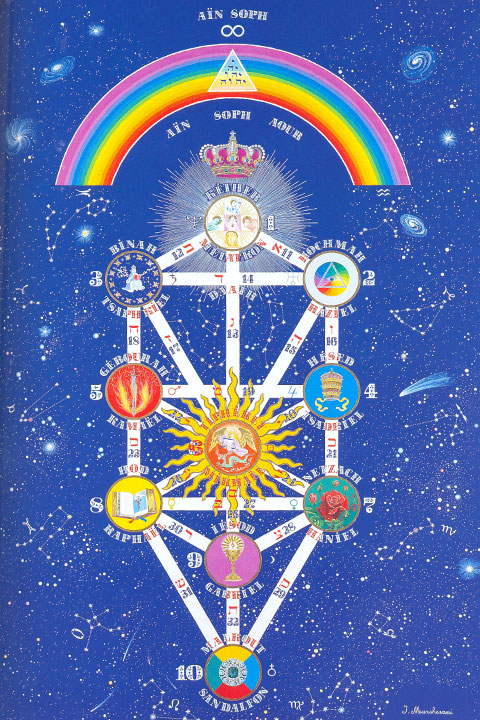 The visual symbol is extremely simple, but the contents are inexhaustible. Many episodes recounted in the old and new Testaments can be understood only in the light of the Sephirotic Tree.

Thus each sephirah includes five distinct planes of being, and you will better understand the nature of these five different planes if you know that they correspond to the five principles in man: the spirit, soul, intellect, heart, and physical body. The divine plane corresponds to the human spirit; that of the sephirah to the soul; the leader of the angelic order corresponds to the intellect; the angelic order to the heart, and the planet to the physical body.

Thus each sephirah is a region inhabited by an order of luminous spirits under the leadership of an Archangel, who is directly subject to God. Of course, it is God who governs the ten regions, but under a different name in each. That is why the Cabbalah says that God has 10 names. These 10 names correspond to 10 different attributes. God is one but he manifests himself differently according to the region. 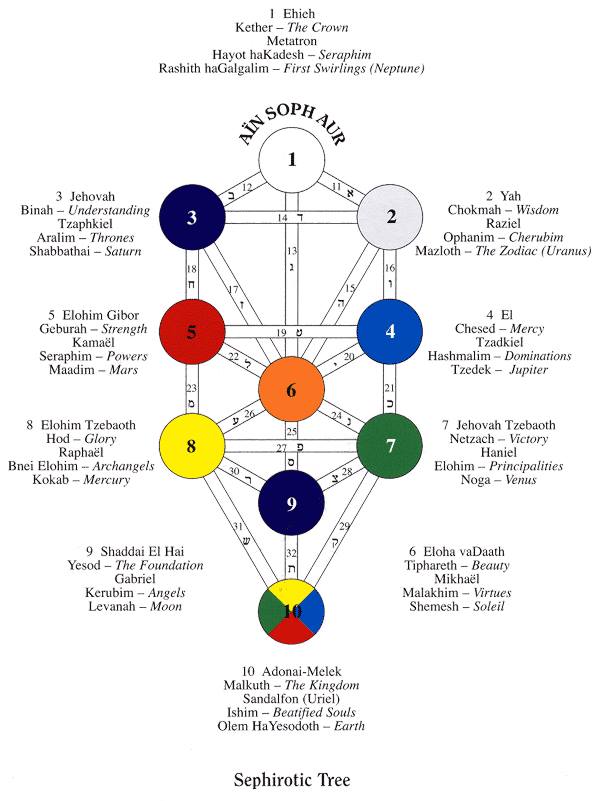 The ten Sephiroth and the five names for each

Why did the Cabbalists call this figure the Tree of Life? Because the 10 sephiroth have to be seen as an organic whole and can be best understood by comparison with a tree.

The Sephirotic Tree has 32 ‘Paths of Wisdom’
How is a tree constituted? It has roots, a trunk, branches, leaves, flowers, and fruit, and all of these elements are interdependent. Similarly the Sephiroth are linked to each other by channels of communication known as “paths”. These paths, 22 in all, are designated by the 22 letters of the Hebrew alphabet.

The 22 paths and ten sephiroth add up to what are known as the 32 “paths of wisdom”, which belong symbolically in the sephirah Chokmah.

The 32 Paths relate to the 32 teeth of the human being
You will better understand the nature and function of these 32 paths if you see that they relate to the 32 teeth of a human being. Indeed do we not speak of wisdom teeth? We have 32 teeth with which to chew our food, and the 32 paths can be seen metaphorically as teeth with which we chew the psychic and spiritual nourishment we receive each day.

Its origins can be traced back thousands of years and was conceived by exceptional beings without telescopes to study the stars
Now you will perhaps be wondering: why ten Sephiroth? Is the universe really divided into ten regions? No, it is not, and this raises a very important point that you must understand. The Sephirotic Tree is designed to teach neither astronomy nor cosmology. It represents a systematic worldview that is mystical in nature, and whose origins can be traced back thousands of years.

The exceptional beings who conceived it had no telescopes or long-distance lenses through which to study the stars. It was through meditation, contemplation, and the intensity of their inner life that they were able to grasp the cosmic reality and render it intelligible with the help of images and symbolic descriptions. So, as I say, the Sephirotic Tree is not an exact description of our universe; and this explains the absence of certain planets, the position of the sun, and so on.

A study of the Sephirotic Tree will always have an uplifting effect on your being
A study of the Sephirotic Tree, the Tree of Life, affords a very clear view of the spiritual work there is to be done and is a method that can accompany you throughout your life. Follow it, and your thoughts will stop wandering aimlessly, and as you succeed in moving forward along this path blessings will be showered upon you.

Returning often to the sephirotic tree switches on new lights each time, not only bringing you insight but also purifying, strengthening, vivifying and embellishing you. Maybe you will never understand this sacred figure perfectly and succeed even less in achieving the virtues and powers it represents, but it will act as the representation of an ideal world and always have an uplifting effect on your being.’

Lecture: Working on one’s own matter – The meaning of the Sephirotic Tree
The Sephirotic Tree is an aid in order to work on our own matter, so as to improve it, shape it, and make it vibrate so that it may one day express the divine world.

Lecture from 12 May 1985, Vibration, Emanation, Radiation
Working at The Three Levels brings Perfection

Light and the Sun
Traditions of the East and West