Jesus and the Cosmic Principle of the Christ, Part 1/7
Sons and Daughters of God, Part 3/7
The Holy Trinity, Part 2/7

In Part 1 we read that Christians present the Holy Trinity as the mystery of the one God in three persons – the Father, the Son and the Holy Spirit – and in doing so are transposing a notion found in the Sephirotic Tree. The divine world, Olam Atziluth, is formed of three sephiroth: Kether, Chokmah and Binah.

So, this is the cosmic trinity that Christians call God, and in affirming that God has only one son they are drawing inspiration from the Cabbalistic theory of emanations.

“But here we are touching a realm that is almost inconceivable for the human brain. That is why it can only be understood by using images. It is said that God created the world ‘ex nihilo’: out of nothing.

Now, ‘nothing’ does not exist. ‘Nothing’ corresponds to the reality that Cabbalists call Aïn Soph Aur: light without end. But even the word ‘light’ can lead us into error, because light is not only what we see but also what permits us to see.

So, Aïn Soph Aur, as the Cabbalists understand it, is a light beyond light, a light of such a nature that it can be confused with darkness. It is the Absolute, the non-manifest, the apparent absence of all movement. In order to emerge from this apparent darkness and immobility, the Absolute imposed limits on Himself. So, He circumscribed a space, and then, extending beyond the limits of this space, He formed a first receptacle and filled it with his own emanations. We call this first receptacle Kether, the first sephira. And Kether overflowed in turn to form Chokmah.

Then Chokmah formed Binah, and so on as far as Malkuth, the earth. Each sephira is an emanation of the one before it. Thus, beginning with Kether, we can say that all creation is simply an uninterrupted condensation of divine light. Yes, creation is always light which is born of light.

So, now, in order to understand the Son, the second person of the trinity, we must travel back in thought to the beginning of creation. The Son is Chokmah, the first emanation of Kether, the Father. It is He who has been called the Word, the first word uttered by God when He said: ‘Let there be light.’ Light is the first-born son of God, the substance engendered by God to provide the matter of creation. All that we see around us is only condensed light. And this light, which becomes matter below, is, on high, the synthesis of all the divine virtues. Yes, light is a cosmic and spiritual reality that we cannot yet envisage.”

Sacred Geometry – This illustration shows the Sephirotic Tree superimposed over ‘The Flower of Life’ with the three Sephirah; Kether, Chokmah and Binah at the top – with the white light emanating from Kether. 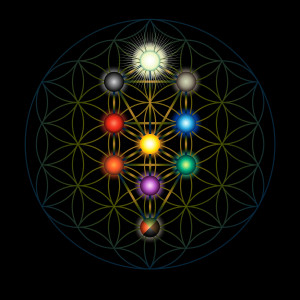 Flower of Life – A beautiful image, based on Sacred Geometry 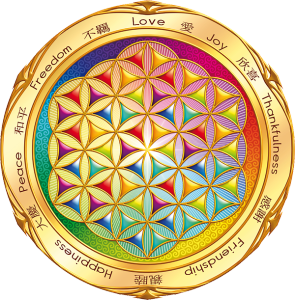 FacebookTwitterLinkedInRedditGoogle+TumblrPinterestVkEmail
Jesus and the Cosmic Principle of the Christ, Part 1/7
Sons and Daughters of God, Part 3/7