In a series of posts we would like to share some extracts from a lecture by the Master describing the creatures other than humans that inhabit the different kingdoms of nature. Today is about Gnomes and Nymphs or Ondines.
“Most human beings behave as though nature were dead, and the result is that their own inner life vibrates less powerfully and with less intensity, and their God-given faculties of perception and sensation are gradually paralysed.

Esotericists generally agree that there are four major categories of these beings, each category having a particular relationship with one of the four elements: gnomes correspond to earth, nymphs or undines correspond to water, sylphs correspond to air, and salamanders to fire.

Gnomes are tiny beings, quite similar in general appearance to humans: they have arms and legs, a nose, eyes and ears, etc. But their aspect is often unlovely and even ridiculous, for there is a lack of symmetry in their faces and bodies. According to clairvoyants who have seen them, they dress in peculiar clothes and wear little pointed hats, exactly like the hats of the dwarfs in the pictures of snow White and the seven Dwarfs.
They can go in and out of the ground, even rocks, without the slightest difficulty, for the matter of their bodies is not the same as ours, and the earth offers them no resistance. the element earth predominates in their make-up, combined with very little water, even less air and almost no fire. from time to time, they condense their bodies in order to make themselves visible to men. their work is with the riches of the earth; they are the guardians of metals and precious stones, and, in fact, if someone makes friends with them, they sometimes give that person a gift of gold or a precious stone. they are not very communicative, but it is possible to win their friendship. some of them are in the habit of slipping into a farmhouse, for instance, and settling down in a nook by the fireplace. the people of the house don’t know that they are there, but they benefit from their friendly presence. 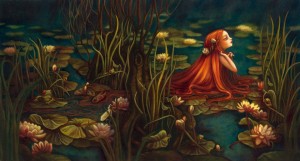 Nymphs or undines also resemble human beings. they are a little bigger than gnomes but smaller than humans; most of them are female and extremely beautiful. their favourite haunts are watery environments: rivers, waterfalls, ponds, lakes, seas and oceans. it seems they are inclined to be more gracious and friendly than gnomes, and indeed they often fall in love with human beings. in fact, men have been known to marry nymphs, but this is a very risky thing to do because they are extremely jealous; they can easily take revenge on an unfaithful husband by strangling or stabbing him…”

To be continued – The Spirits of Nature